In a week where Kansas reclaims that number one spot - playing like a true preseason favorite with contributions from just about everyone in their rotation - I bring both good and great news along with our week four rankings. Not only was I able to tell the Commonwealth of Massachusetts to stop sending unemployment insurance my way, but the baton has likely been passed to a new editor of the Power 16. There's only so many hours in the day, and I could tell you were getting sick of me.

Continue to supplement your college basketball intake by frequenting Searching For Billy Edelin and Blogging the Bracket.

Nothing says basketball in historic Allen Fieldhouse like Eddie Money singing the national anthem, right? Well it happened Monday before tip-off against Missouri, and the consensus was that the 80s pop singer turned the suck level all the way up 11. Following the game, he told KUSports.com's Gary Bedore:

"My son goes to junior college. I wish he was here today to see how beautiful the girls are who go to school in the Midwest. I've been to UCLA, all over the place. The prettiest girls in the country are right here."

Just a few first place votes away from giving us a fourth different #1 team in as many weeks, the ‘Cuse continued their winning ways with a convincing victory over Georgetown on Big Monday. Many are whoring a portion of Jim Boeheim's post-game press-conference around, because it's supposed to be funny or something, but the real take-away from Monday's game is video from the Carrier Dome's Kiss Cam. My three cents: McDonough apparently plays for the other team so he probably didn't enjoy it, Bilas looks bashful, and Raftery... well he probably wasn't yelling "onions!" after that smooch.

Did you know the Wildcats are off to their best start in school history? Can you believe that this kind of feat from an East Coast team in a large market is going overlooked? Remember, these guys were in the Final Four last season.

Many are making a big deal about the "backloaded" schedule they face, which is deserved as ‘Nova will travel to Georgetown, West Virginia, Pittsburgh, Syracuse and Cincinnati. But this team seems to have curbed its erratic play since that circus event they were part of in Louisville.

With Kentucky going down, expect this team to receive at least a few first place votes from both coaches and the media.

The loss by Kentucky on Tuesday was hardly surprising to me. I feel like that's been coming for a while. The Wildcats turn the ball over too much and don't defend the 3-pointer well. It's pretty much a recipe for an upset.

I blame Devan Downey and an Obama-curse that suddenly seems to have legs as legitimate, but nonetheless the Wildcats fall to #4 after being on top of the world. I think it's a good thing for those outside the Bluegrass State. This fan-base is more fun when their expectations are not met, and they get all overbearing and stuff.

With four sure-fire NBA players on the roster the Longhorns should just win, right? They could if they had a point guard, but Dogus Balbay is inadequate for a team looking to win a national championship.

A suggestion to Rick Barnes: let Avery Bradley run the point. The freshman already has a higher possession percentage than Balbay, he's can't be a shooting guard at the next level so why not learn now, and it could start a shift towards shortening this team's ridiculously deep rotation.

For those salivating over Kyrie Irving, the Blue Devils next game-changing point-guard, Brendan Murphy, a recruiting guru for ESPN, provides us with a nice feature to get us already thinking about 2011. Apologizes to current Blue Devil backcourt mates Jon Scheyer and Nolan Smith.

Said Irving on how he hopes his career in Durham plays out: "The two point guards that led [Duke] to national championships were from New Jersey and I plan on being the third one."

A new Spartans logo is set to be officially launched in April as part of a rebranding campaign orchestrated by Nike. The growing sentiment from fans and undergrads: AHHHHH!!! Approaching 50,000 Facebook members, "The Old Spartan Logo" group is where Spartan fans against the new logo are congregating to voice their displeasure. Over at MLive.com, 82 percent of voters prefer the current logo, and a junior finance major in East Lansing thinks this "new" logo doesn't solve anything, and offers a more practical option.

Oh, and by the way, Tom Izzo has his team off to the program's best start in the Big 10. That might be a bigger deal. 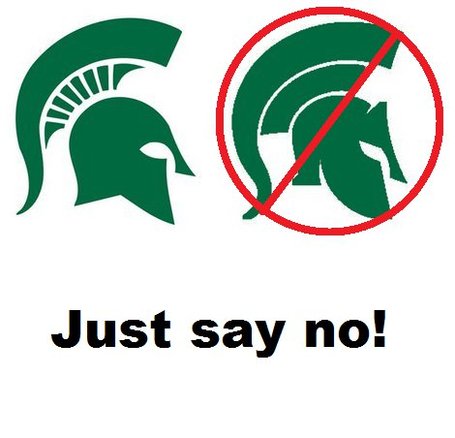 Six days later, I am still convinced that if the Mountaineers took an "L" to Ohio State, we would be searching for that entire team. Literally, they might be chained together in a nondescript cabin in Monongahela National Forest. You should never underestimate Bob Huggins and his tormented mind. Winners of their last three, WVU is back in our top 10 and have somehow avoided any losses that would leave fans gasping for air. Still, I think they’re doomed come March.

Clearly, we were anxious to get the Boilermakers back onto the ledge from which they fell from last week. Still, they may not be worthy of it at this point. After stealing a one-point victory last night from Wisconsin (a team 4-5 away from the Kohl Center) it seems this team isn't ready to challenge Michigan St. for the Big 10 title. Lewis Jackson is back, and if he finds his way into the rotation it will add another reliable ballhandler with a decent shot. But a one point win over the Badgers and victory over the Manny Harris-less Michigan Wolverines gives Matt Painter little to be proud of.

K-State checks in at the 10 spot, partially due to SB Nation's BC Interruption who hurled them down to #15. I guess a home loss to Oklahoma State will do that. The Wildcats really have no need to look back, though, because the most important game of their season is Saturday against Kansas. It's at home, Gameday will be there, and many will be tuned in as they get primed for a night out, so a win here could really propel this team back into the short list of elite teams.  Jacob Pullen should really try to replicate his 25 point, 6-7 from deep output like he did Tuesday against Baylor.

I've never been shy to don a nice pink JCrew oxford shirt during the summer, so hats off to BYU for going the extra mile as part of the Coaches vs. Cancer Suits and Sneakers Awareness Weekend. According to a spokeswoman, the event is a collaborative initiative of the American Cancer Society and the National Association of Basketball Coaches (NABC) to increase cancer awareness and promote the American Cancer Society. Bottom line, the Cougars will look cool as all hell tomorrow against Utah, and look to rebound from their first conference loss on Wednesday. 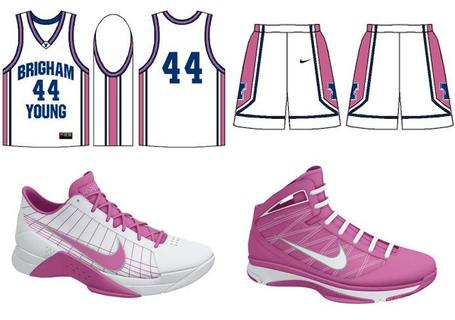 As much as I want to poke fun at KXLY’s Dennis Patchin for his cheesy graphics and awkward, contrived "action" stills, the sports guy out in Spokane has got a point here. Currently undefeated in the WCC, the Bulldogs arguably play with more pressure hanging over them than any other team in the country. Would you ever want to make the night of a general studies major at San Diego? No. Those reckless brats have enough fun to begin with, why give them a reason to blackout because you got complacent and lost your first conference game?

Monday’s 14-0 start against Syracuse couldn’t have been a bigger mirage. In three minutes, the Hoyas were a perfect 4-4 from behind the arc against a 2-3 zone. But they never went inside, never even bothered to go inside. They were trapped, doomed for the rest of the game. Georgetown probably has the talent to play in a regional final, but not the depth. Saturday’s game against Duke is huge. So big that Lady Gaga is being used to garner excitement amongst the undergrads.

A lot of second/third tier teams aren’t winning consistently, so despite the Vols two game losing streak, it’s difficult to replace them with a more worthy team at this point. After 34 minutes of back-and-forth play, UT seemingly gave away Wednesday’s game to Vanderbilt, taking their first loss in Thompson-Boiling this season. Another week like this, though, and it’s the 5-0 in SEC Commodores likely inserted as the conference’s second best team.

With a current RPI of 47, and no impressive non-conference victories to boast about, the Terps are slowly garnering some national attention as the current leaders of the ACC.

Pomeroy has Maryland as the 8th best team in the country right now, and predicts a final record of 21-9 and 11-5 in the ACC. Can't complain about that at all. In fact, three of the four remaining losses he calls for are predicted at a one score differential - basically a crapshoot. Is Maryland that good? Probably not. But I won't argue with the figures.

As a way to temper that, I'll point to Jerry Palm's CollegeRPI, an inherently flawed yet ridiculously important formula. He's sticking Maryland at 54th right now - significantly lower than KenPom. Just to keep you on your toes.

Are we rating them high, or at least prematurely placing them in the top 16? Yeah probably, but I approve of it.  In the event that the Terps continue to climb and remain relevant, I suggest you brush up on your Greivis Vazquez knowledge. He's quite the polarizing figure.

Finally, after a few feeble pokes at the Power 16, the Owls get deserved inclusion…only to lose convincingly Wednesday night to Charlotte. The lone Atlantic 10 representative, a conference in position to earn its most bids ever since the late 90s, Temple is led by one of the country’s top rebounders in Lavoy Allen and senior guard Ryan Brooks, who leads the A-10 in minutes played. A win Saturday over rival LaSalle means Fran Dunphy’s club finishes 4-0 against their intra-city Big 5 opponents.

Which reminds me...It's Always Sunny in Philadelphia. Great frieken show. Why not embed a random clip to lift your spirits on this frigid Friday?