The Hall of Fame Waiting Game

Share All sharing options for: The Hall of Fame Waiting Game 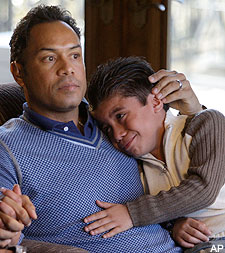 You know the expression you can't be a little bit pregnant? Well, if you trust the logic of the Baseball Writers Association of America, you can be a little bit Hall of Fame.

First, congratulations to Andre Dawson, who got into the Baseball Hall of Fame on his ninth try. But there are now 294 members in the Baseball Hall of Fame, and just 44 of them were inducted on the first ballot. Roberto Alomar (pictured right, with his obviously upset son), up for the Hall for the first time this year, is a sure-fire selection at some point, if you listen to all the pundits on MLB Network. But why not this year? Was it the spitting? Was it the fact that people still think there's a semblance of exclusivity to being a first-ballot selection? From the MLB Network conversation between Tom Verducci and Ken Rosenthal.

I agree. And so do most reasonable people ... but not the holier than thou old guard of the BBWAA. Since 2000, there have been just 10 first-ballot selections. This year, people expected that both Alomar and Barry Larkin could get in the Hall. And both, based on their numbers and their impact on the game, deserve to be in the Hall. The panelists on MLB Network say with assurance that Alomar will get in, probably as soon as next season. But it goes to the point that some voters, Jay Mariotti most publicly this week, still think that the first-ballot is sacred.

So if it's that sacred, why is it so darn hard to find that list? Go ahead, do a Google search for Baseball First-Ballot Hall of Famers. I'll see you in half an hour. You won't find it on MLB.com. You won't find it at the Baseball Hall of Fame website. In fact, the best you'll find is a USA Today page from 2007 (add Rickey Henderson to that list and it's up-to-date).

The point is that according to the actual Hall of Fame, you're either a Hall of Famer or you're not. But the BBWAA, which has the responsibility of enshrining these players, has this sadistic method of voting that a player has to go through a hazing ritual or pay years and years of penance to get into the Hall. If you wait 13 years, like Bert Blyleven has -- he was just five votes short this season -- should it make you happy that, presumably next year, another group of voters will finally check the box next to your name and get you in? Do the voters need to see how badly he wants it before they allow him in the door? It makes no sense. His career has been over for nearly 20 years. He's either a Hall of Famer or he's not, and to vote for a guy, then rescind the vote a year later because other people are more worthy is asinine. Almost as asinine as waiting nearly 15 years to put a guy in the Hall in the first place. Or as asinine as not voting for a player in his first year of eligibility because of some unwritten sacred moniker of being a first-ballot player you feel he doesn't deserve.

MLB Net's Matt Vasgersian spoke with Blyleven today and congratulated him on his future induction. With just two years left before getting shipped up to the Veterans' Committee, Blyleven will likely get in next year. And while Vasgersian was being beyond polite to preemptively congratulate Blyleven, it illustrates the fact that everyone knows he'll get in over the next two years. So who will those five voters be next season? Will they have a change of heart after more than a decade? Will they just succumb to the peer pressure of the other voters getting him to the precipice and finally let him in? Was this just some sort of 13-year hazing ritual for some scribes?

And now that a guy like Dawson is in -- deservedly so based on those who preceded him -- after nine years, does that make him as much a Hall of Famer as Henderson, who got in last year on the first try? Is there a separate room for those 44 other names (45 if you include Lou Gehrig) in Cooperstown? And should there be? Should we have to go through 15 different doorways to see who got in on what try? I bet the first room would have bright lights, big windows and velvet ropes to keep the public close-but-not-too-close. Each room would obviously get smaller and smaller until the guys who get in on the 15th try just end up with their plaques above the urinals in the bathroom or in an electrical closet.

Don't even think about trying to find the Veterans' Committee inductees. Those plaques are stuck in a cardboard box under a stack of old "Who's on First?" movie reels in the basement.

So congrats, Hawk, you're finally a Hall of Famer. You're not as good as Al Kaline or Willie Stargell, but you're better than all the shlubs who will have to wait until next year.