Share All sharing options for: Sports Memes: The 2010 Forecast Edition

Tiger's Inevitable Addiction/ Redemption Cycle.  If Tiger were anything like the the great manbears who once roamed our cultural landscape, he'd shake this off, change the name of Privacy to Keepin' It Wet, and sportily roam the shores of glamorous places you cannot afford. It's what JFK did, dammit, and he led our nation to victory in the War On Presidential Administrations Without Glossy Photo Ops. (Which i can proudly say we won, America. FISTPUMP!)

Lee Marvin would go spearfishing naked off the coast of Baja, Vladimir Putin would go wrestle a tiger or something, and most other men who lived every week like it was shark week would just keep on keepin' on. For Tiger this would mean continuing to pay large checks to his wife for having sex with other women on innumerable occasions, sayin' that ain't a thing while picking up million dollar appearance fees and continuing to rip a blue streak through the good and semi-decent looking service professionals of our world.

This is what a real, bullet-chomping, whiskey-swilling soldier of fortune would do. Tiger will follow a more mediocre path, sadly. Rehab for sex and drug addiction. A national television interview in soft lighting conducted by the only the tenderest of professional softball-pitching reporters. (Katie Couric, don't even think about it.) Possibly a discreet reference to the involvement of religion at one point. And, when the time is right,  a solid win in a tournament followed by two to three days of the most bloated redemption story ever pasted wall-to-wall with pictures of an emotional Tiger Woods diving into a pool of cocktail waitresses  doing the Tiger Fistpump 4.0: The Mature, Humble Fistpump. 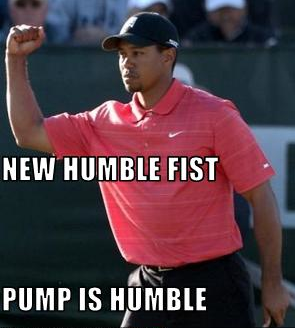 The casino is offering no odds on this happening, nor on someone writing about Tiger's bravery and toughness for overcoming his penis. I mean, addictions.

Sexy Date Night With Lebron James. Price: More Than You Can Possibly Imagine. Duration: Six Years. So much of sports stories in the 21st century centers not on the game itself, but on the numbers and endless widgets people have set up to play with the numbers involved in the game. The actual cash value of fantasy football in terms of the increased interest it brings to the game would drop the most cynical of jaws; ditto for fantasy baseball, whose numbers remain robust going into its fourth decade of existence. Making up games based on games: it's post-postmodern, and it's the zip code you live in as a 21st century sports fan.

The same can be said for stories like Lebron James' 2010, a season whose drama comes as much from who's going to turn him into his own third world country by economic scale. (No Cleveland jokes go here.) (<---that's one.)  Lebron's contract, his ultimate destination, and the numbers behind it will be the go-to NBA story regardless of the scores Cleveland puts up, and if New York is involved you can just throw a 50% modifier on that and watch it boil on ESPN for the next five months. If this means more Lebron Muppet commercials, I endorse this meme heartily.

Something Shmuh Something Sommah Schmothing Something about the Yankees or Red Sox. A team that spends more money than other teams will likely dominate baseball discussions. There will be angst around a trade deadlines. One highly paid team will tank. One will go to the playoffs. Everyone will hate on Bud Selig with a fierceness. Someone win the World Series when it finally ends sometime in mid-November. Then this cycle will repeat for infinity and if you wonder why baseball writers do inane things like hand blank Hall of Fame Ballots and pray for death IT IS BECAUSE THEY ARE STUCK IN A SARTRE PLAY AND WANT OUT BADLY. Apologies, guy who sucks at writing anything nice about baseball.

Tim Tebow's Imminent Humiliation in the Draft. I'm pretty sure he doesn't believe in evolution, and may believe Jesus rode dinosaurs because he's home-schooled, and like most things you decide to do for yourself it probably didn't go all that well for poor Tim's education. (There's like, Socrates, and John Stuart Mill, and that screaming girl from the 1997 Spelling Bee. Add Tebow, and that's your tally of successful homeschooled kids, and your child isn't any of those four.) Tebow will be the latest Heisman winner torn to virtual shreds in the draft thanks to his loopy throwing motion, infrequent turns under center in college, and desire to run the football when things break down. I'd make fun of pro scouts' stodginess and inability to comprehend anything but one sterile brand of football, but it's Wednesday and Pat White probably still doesn't know where he is.

Then again, if any player could do it, it's Tebow, who will probably ride into the draft on the back of a Triceratops with the son of God riding shotgun just to prove me wrong.

3-D ESPN.  I don't even know what this is and I want it. ESPN is working on HD 3-D technology. Pat Forde's majestic hair, soaring from his head in a plasticine wave like you were sitting right next to it! Jay Mariotti's pendulous human mask dangling is all of its corpse-y glory RIGHT IN YOUR LIVING ROOM, so vivid you may be able to see the lizard creature who occupies his skin-suit underneath it!  Televisions that will cost as much as a used Kia! Did you say expensive goods I can't justify buying GIMME GIMME GIMME. Damn you, America. You keep putting out idiot food, and I keep paying for the privilege of shoveling it down my throat. This technology is incomplete and unsatisfactory until they find a way to turn everyone into 15 foot tall Avatar characters, because Linda Cohn as a blue giantess is something the world needs. Don't judge me.

The Ever Present Brett Favre Death Star and Country Bear Jamboree.  The NFL season will end, and yet again Brett Favre will return to his Mississippi estate to shoot Wrangler commercials, drive around aimlessly on an ATV, and Rachel Nichols will pull up the RV and do her yearly stakeout on the Favre estate for the WWL. She'll just be coming off a nasty breakup, and she'll be wondering what this crazy world is all about before Harry Connick Jr, working as a handyman for Favre and wearing jeans and a white t-shirt, shows this big city girl what she's been missing in small town life. There will even be a scene where she and Deana and the kids dance to "Got to Give it Up!" Four stars, can't miss entertainment unless you've seen it all before, and you have.

The Vancouver Olympics Watching NBC attempt to bleed the stone of the Olympics will be almost as entertaining as watching them hype football teams coached by Charlie Weis that lose to Syracuse, but somehow, even through the haze of inspirational stories, the Olympics will suck you in because they remain fascinating, and because you will probably dodge work by watching them online. I always fall for biathlon thanks to its straightforward Scandinavian beauty: here's how you ski long distances just to kill things with a rifle, and here's a medal for doing it well. If you wonder how the Finns beat the brakes off the Russians in the Finno-Russian War of 1939-1940, it's because this is their idea of fun.  Also: fun watching Johnny Weir being described in three hundred different variations of the word "sorta gay-actin'."

Lance Armstrong Sponsored By Flomax: Providing A Steady Stream Of Excellence For Cycling Since 2010: Lance isn't being sponsored by Flomax, though the punnery would never end if he did. Lance will attempt to better his third place finish from last year and give hope to all the pushing-forty cyclists in your neighborhood running time trials while you pass them driving to the gym to get on an elliptical machine. Don't feel bad: you're not the one inflicting nerve damage in an extremely sensitive area like they are while you watch cycling wrapups on Versus

Alabama Occupies the Tebow Seat. If Texas wins, Colt McCoy leaves, and Texas will slide into a semi-rebuild mode with little fanfare. But if Alabama wins? Oh, I'm sure the rational, easygoing Crimson Tide fanbase won't look at a returning quarterback, a stacked backfield, Julio Jones and Marquis Maze at wideout, and the machine-like Alabama defense and expect a repeat national title. No, no, they wouldn't do that at all.

//seriously, they'll go insane and expect three in a row

Sports Memes: Forecasting The Stories That Will Takeover Our Lives This Year