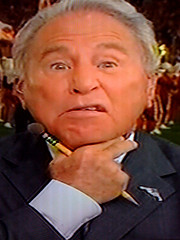 I was all set to tell you about the dueling outrageous tie battle between Tom Rinaldi and Desmond Howard. (Pea green versus purple.) I was about to tell you about Mark May's sudden blindness, the only possible explanation for him wearing dark glasses at night on national television. I was about to even remark on Lee Corso's outstanding choking gesture and Pete Carroll's appearance on the broadcast, because one was funny, and the other was the most beautiful, inspiring thing ever. (Like everything Pete Caroll does, of course.)

Then Josh Groban showed up with Flea and sang the national anthem with Flea and a mariachi band, and my brain melted. I have to go now and pick the dragons crawling on my ceiling off, because I am currently under the power of powerful hallucinogens. (And judging from the first fake punt call by Nick Saban from his own twenty something, so is he.)