Getting To Know Garrett Gilbert

Share All sharing options for: Getting To Know Garrett Gilbert

It looked like a brief scare for Texas--Colt McCoy would shake it off for a play, and then get back in there. Now, McCoy's got his pads off and is heading to X-ray room in Pasadena, with the Longhorns' pinning their title hopes to the right arm of Garrett Gilbert, a true freshman. So just who is this kid?

Well, as can be said for most of the backups at both of these schools, Gilbert was one of the nation's most prestigious recruits coming out of high school. He went to Lake Travis High School in Texas and he's the son of former-NFL QB, Gail Gilbert. Last season he passed for nearly 5,000 yards and 55 touchdowns on the way to a state title. He was a member of ESPN's Elite 11 Quarterback group, a participant in the star-studded Under Armour All-American game, and, well... You get the point. Generally just an all-around high school badass. He's got the pedigree. 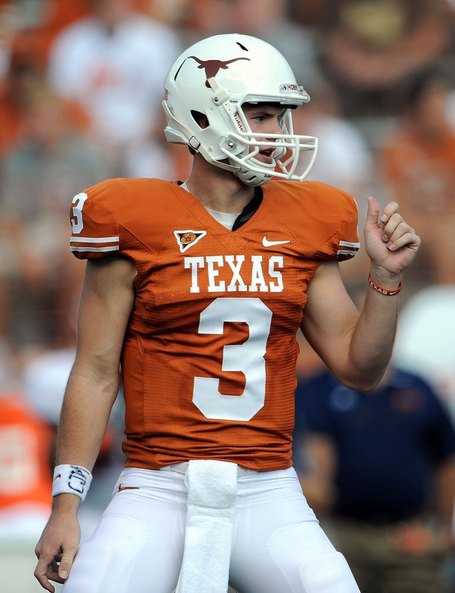 ...But he's still a true freshman. He played in seven of Texas' games this year, connecting on 15 of 24 passes for just 124 yards, and no touchdowns. But hey, no interceptions, either! And for better or worse--pending Texas going to the wildcat formation with converted quarterback John Chiles--it appears that Gilbert's going to be leading the 'Horns on offense for the foreseeable future.

To put this in perspective, he was born in 1991. Can he win a Nationa Championship against the best defense in the country?