NFL Picks, Lines, And Odds For Week 7: There's Nothing Worse Than Breaking Even

Share All sharing options for: NFL Picks, Lines, And Odds For Week 7: There's Nothing Worse Than Breaking Even

Remember last week's NFL picks column when we said that underdogs had been beating the odds all year long? Well, that changed last week. Sort of. We still can't trust the favorites in this league, but at least for a week, the chalk held up.

For the first time all year, the 49ers looked halfway decent--or at least good enough to beat the Raiders--while teams like the Patriots, Eagles, Saints, and Jets all came through in games against plucky underdogs that many picked to win. The favorites went 11-3 straight up last week, and 7-6-1 against the spread. Not bad. Of course, the Chargers collapsed against the Rams ensuring that A) I wouldn't break .500 for the week, and B) Everyone remembered that you still can't count on any favorites in this league.

For me, it was an unfulfilling weekend. 2-2-1, with wins on Detroit and the Jets, and losses on Oakland and San Diego. And a push on Baltimore. That damn field goal in overtime... Terrible.

Breaking even just feels so empty. We pick five games each week so that one way or the other, I'll either look smart or stupid. It's an excuse to either feel unreasonably shrewd or turn myself into some victim of the universe. That's half the fun in gambling. But going 2-2-1? That's just a waste of time.

So here's to hoping that this week, I'll either look really smart, or really stupid. Anything's better than breaking even. And look! SB Nation has a new Odds Section. Each sport has its own odds page, all powered by our friends at Odd Shark. It's a small detail, and nothing too spectacular, but if you're looking for a place to check the lines each week, bookmark this page.

I grew up betting on sports and checking sketchy websites for the point spreads each week, and it's pretty great that mainstream sites are finally embracing the fact that, you know, everyone's interested in this stuff. Even if you don't put money on the games, it all adds a wrinkle that makes the sport a lot more interesting to follow. Speaking of which... Here are the lines for this week (courtesy Odd Shark) 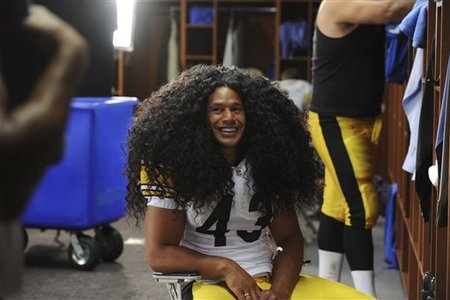 1. Pittsburgh (-3) at Miami. There are so many factors to consider when making these picks. That's why the guys in Vegas are so good at this stuff. They actually consider those factors. Me? It's no fun to track how Miami plays after a win, or what they've done against the spread in their last five games, or whatever the little factoids may be. Sometimes, you just have to pick a team based on a picture like the Polamalu candid above. Sorry, but Big Ben will only improve on last week's performance, the Steelers defense will give Chad Henne a much harder time than Green Bay did, and that picture is ridiculous. I'm taking the Steelers.

2. Cleveland at New Orleans (-13). The Browns are a double-digit underdog for the third straight week. Considering there's usually only one or two double-digit underdogs in any week, that's a pretty impressive accomplishment. A few weeks ago we mentioned that betting against the Buffalo Bills every single week wouldn't be a bad investment strategy. Well, the Browns are sort of like that, except there's a little more guilt involved. Like rooting against a widow or something. One of my best friends is from Cleveland and he sent me this text message last weekend:

I've never been more depressed about sports or life, in general. I'm at home this weekend. We legitimately have nothing promising to look forward to sports-wise for at least three years.

That's all he said. And it's true. True, and really sad. That said, I'm taking the Saints.

3. Jacksonville at Kansas City (-1) This line could change, as it's currently off the board at most of the sports books while Vegas waits to see what the QB situation is in Jacksonville. That said, our Jaguars blog sheds some light on the situation here:

...As of right now, Todd Bouman is slated to start for the Jaguars.

Todd Bouman hasn't thrown a pass in a real NFL game since 2005.

What more is there to say? The last time Jacksonville's quarterback threw a pass, My Humps was the most popular song in the country, George Bush didn't care about black people or Hurricane Katrina, and Shaun Alexander was the Most Valuable Player in the NFL. No matter what the line is, take Kansas City. 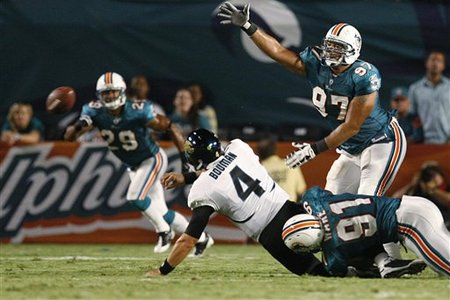 4. Arizona (+5.5) at Seattle. One of the most valuable tools at Odds Shark is their weekly NFL Line Moves piece, because it gives you an indication of how people are betting. When a line moves a full point, that means the general public is betting heavy on one side. But when a line moves 2.5 points, like the Seattle-Arizona game did this week? That means everyone thinks it's a sure thing. And when that happens...

Always go the other way. Football fans have a short memory. For instance, the Seahawks looked good in Chicago last week, and in the minds of gamblers, apparently that erases their putrid showing against St. Louis in their previous game, a 20-3 loss. It's not to say the Seahawks are bad, but any team that loses 20-3 to the Rams is definitely not good. As for Arizona, they played their best game of the year against the Saints in Week 5, and in Week 7, they're coming off a bye. So why not roll the dice with the Cardinals here? If it's between backing Max Hall and Matt Hasselbeck, I think I'm going with Max Hall and the Cardinals at this point.

5. St. Louis at Tampa Bay (-3). Screw it. I've lost money betting against the Rams twice in the past month, but that just means it's time to double down! Right? I mean, they can't possibly be good? Can they? Sam Bradford looks pretty solid, but he's throwing to, in alphabetical order, Dannario Alexander, Danny Amendola, Brandon Gibson, Mardy Gilyard, and Laurent Robinson. WHO ARE THESE PEOPLE?

By contrast... Well, the Bucs receivers at least look like a college all-star team: Arrelious Benn, Preston Parker, Michael Spurlock, Maurice Stovall, Samie Stroughter, and Mike Williams. So, I guess that's better? Anyway, I'm going with the second-year QB over the rookie and the College All-Stars over the auto-generated names in the Rams receiving corps. But mainly, this is just a battle of wills with Vegas at this point. The Rams may not be as bad as I think, but damnit, I'll keep betting until I'm proven right. Take the Bucs, because I'm beginning to despise the Rams. 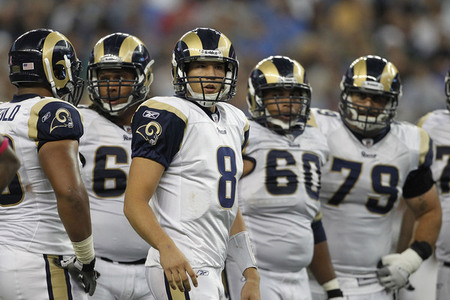 NFL Picks, Lines, And Odds For Week 7: There's Nothing Worse Than Breaking Even