UPDATE: This is why we don't write about celebrity gossip. TMZ has removed the post about the divorce, and replaced it with this:

TMZ reported that Tony had filed for divorce.  Two clerks at the Bexar County Courthouse in Texas had told us the case was filed and sealed by a family law judge.

But Eva's rep tells us Tony did not file and does not even have a divorce lawyer.

Thank God Eva's "rep" set the record straight. Ari is going to be so PISSED about all this.

As penance for the red herring, here's Ty Burrell from Modern Family, speechwriter to the sports stars of the universe. NSFW, but hilarious.

If you'd like to read what we would have written if they actually got divorced... It's after the jump.

According to TMZ, Eva Longoria and Tony Parker have called it quits. The Spurs star filed for divorce in Texas yesterday, and Eva Longoria filed will soon file for tattoo removal when all this gets settled:

Eva has stated that she has Tony's initials tattooed on her body ... in a mystery spot. She also has Tony's jersey number  -- "Nine" -- tattooed on the back of her neck.

Divorce is never good, but this one hits particularly close to home for us at SB Nation. Just a few months ago, Stephanie Denning of our accounting team spotted these two lovebirds in Dupont Circle and filed the following report:

Spotted: Eva Longoria and Tony Parker sucking face in Dupont Circle's circle. Correction. Eva Longoria clearly more into it than Tony Parker. The only reason I noticed them was because I was thinking, "Who are these people?"

They were hardcore making out. Kinda scandalous. 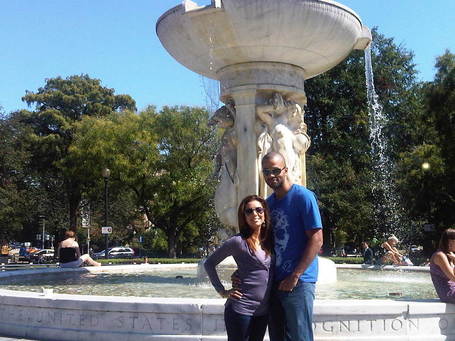 Was Eva Cheating? Was Tony? You know how those French guys can be... In any case, the rest of us are left to pick up the pieces of another dream marriage deferred. Does true love even EXIST?

A great philosopher once wrote: "Pimpin ain't easy, but monogamy is IMPOSSIBLE."