Diversity Motorsports, LLC (DMS), is about as diverse as it gets as far as race team ownership goes.  Not only are the owners of this newly formed team are diverse in their own ways, but their approach to the marketing and management of the team is also very diverse.

The owners of DMS are long-time racer/car owner Bob Schacht, motorsport sponsorship marketer Tina Kennedy, and entrepreneur Terrance Cox III who is the CEO of  Eko Custom Sandals.  Each of these owners come from different backgrounds and bring to the table a unique set of skills needed to form the foundation on which their new business venture is built on; being different - being diverse.  Thus the name Diversity Motorsports, LLC.

How did all of this come together?

All of these people were touched by one individual; Ricky Byers.

Yep, the Racing For a Cure guy.

Once they started working with Ricky and realized the potential of his Racing For a Cure program they decided to band together and put a better plan into action.  That plan eventually grew, or snowballed, into Diversity Motorsports, LLC.

But wait, there's more ... much more.  You see this is bigger than Ricky Byers and his Racing For a Cure program - much bigger.   DMS is not just about Racing For a Cure, it is about community and giving back to it through racing related programs.   "Diversity Motorsports is committed to giving back by providing resources and platforms to those less fortunate to help them grow and become contributing citizens".

In addition to Racing For a Cure and Crowns For a Cure, an organization including current beauty pageant title holder Rachel Juillerat (Mrs. United States), whose mission is to raise awareness in the fight against cancer,  DMS will also be contributing time and money (from race purses) to promote the following causes and events;

DMS will also be introducing the Drive To The Top program where DMS "will secure and supply all equipment, pit crews, driving coaches and a complete marketing package that will bring everything needed to move them forward and expand their brand in the motorsport industry".

Now you're wondering; "How can the winnings from one ARCA driver (Ricky) support all of these programs?" 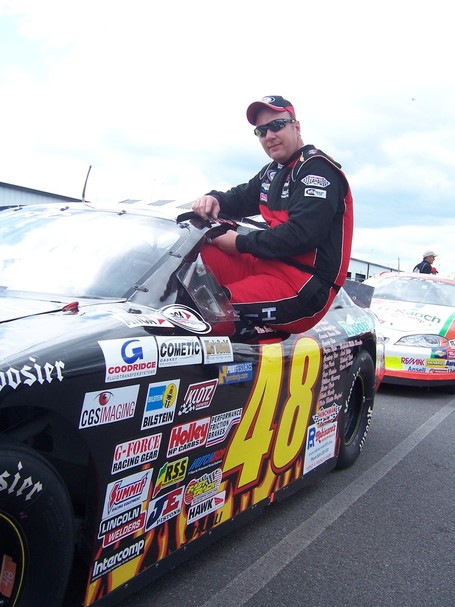 Ricky Byers will start in ARCA at the beginning of the 2011 season and move to the NASCAR Nationwide Series once he has met all of NASCAR's requirements for racing in that series.  Credit:  Bob Ellis - NASCAR Ranting and Raving.

Easy, DMS has more than one driver signed for next season, including the 2002 Camping World Truck Series Champion, Mike Bliss!

Currently, Bliss is scheduled to drive for DMS in the NASCAR Nationwide Series next year with Byers, Pistone, and Baker all in the ARCA/ReMax Series at the start of the year.  Once he has NASCAR's approval Byers will team up with Bliss in the Nationwide Series for the remainder of the season.

Although the owners of DMS were very forthcoming with me about their new business venture and their programs, drivers, etc. I could not nail down who the sponsors would be for their four cars.  I was able to confirm though that all of the cars will carry the Racing For a Cure logo for the duration of the season and that each car will have it's own individual sponsor as well.

It was alluded to, however, that the sponsors would be revealed during the team's official press conference at Bob Schacht's race shop within the next few weeks.

It would appear that sponsorship at DMS is going to be as diversified as DMS's owners, drivers, and programs.  DMS is introducing new "cutting edge" innovative sponsorship packages and accounting policies that operate with total transparency called the "Sponosrship Funding and Accountability & Clarification" policy or SFAC-101 for short.  This policy is "the first of its kind that allows sponsors to have full access to all accounting practices and books, at all times so that they can see exactly what they are getting for their advertising dollars".

Please note:  this article includes excerpts from the yet to be released Diversity Motorsports, LLC. press release and newly operational web site (www.diversitymotorsportsllc.com).