Will the Last Team to Leave the Big 12 Turn Out the Lights?

Share All sharing options for: Will the Last Team to Leave the Big 12 Turn Out the Lights? 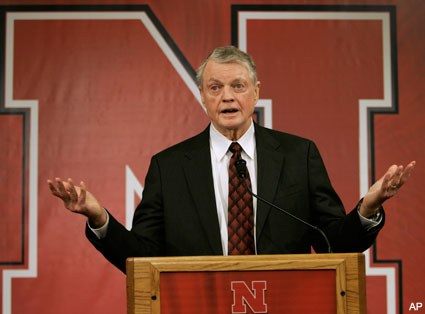 Missouri kicked it off by being publicly interested in a move to the Big Ten. That wasn't a huge shock. That move makes a lot of sense for Missouri geographically and financially; it's even pretty decent when it comes to longtime rival Illinois hanging around, pretending Northwestern is its big intraconference rival. It's something they'd have to consider.

But does anyone want to stay in the Big 12? Even if Texas to the Big Ten was clearly insane and Colorado to the Pac-10 pretty unlikely, this latest salvo from a Big 8/12 icon has to sting:

"We haven't entered into any formal talks with anybody right now," [Tom] Osborne said. "We're focusing on the Big 12. But I don't think that means if somebody wanted to pick up the phone and call us, that we'd hang up on them. You listen."

Standard boilerplate indicating Nebraska would like to keep its options open? Maybe, but Nebraska is clearly not pleased with the balance of power in the conference:

"I would have to say the center of gravity has moved south," he said."You'd have to say that trend to the south still continues to this day,which is a little concerning sometimes for people in the north part of the Big 12."

The thing about this that's striking is that no one's even talked about Nebraska seriously, or talked to them. A couple of guys bring it up to Osborne in a press conference and he opens up even if gently, on the Big 12 without so much as a phone call from Jim Delany. Would a conference approaching Iowa or Kentucky or Boston College get the same answer? ACC expansion was a cloak-and-dagger affair in which no one was going to say anything until it was done.

Hell, the only quotes about the Big Ten from frequently-mentioned Big East schools are basketball coaches complaining about the prospect as long ago as 1990. No one has gone on the record. Even in the BCS' red-headed stepchild conference, there's more loyalty than there is in the Big 12.

The reasons are probably the obvious ones: everyone in the North feels ignored. The money is nowhere near that of the Big Ten or SEC, and it's not evenly distributed. Texas and Oklahoma re probably shrugging and saying "if any of you mugs would win the Big 12 ever, maybe you'd get some respect," and they're not wrong. But if you're wondering whether loyalty and tradition will win out against ten million dollars, the scale seems decidedly tilted to the money.