Share All sharing options for: NBC's Dumbest Decision Yet: Men's Gold Medal Hockey Game To Be Shown On Tape Delay To West Coast

It is readily known that NBC does not like the West Coast with most of the Olympics coverage being shown on a tape delay, including their coverage of the Czech Republic-Russia game on Sunday. It appears that is not going to change with the men's hockey gold medal game on Sunday. Here is the TV coverage from the NBC Olympics site for Los Angeles: 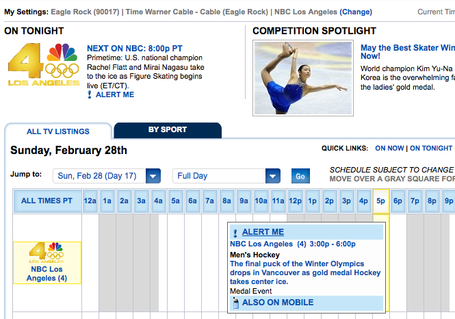 That most definitely shows the hockey game on at 3 PM PT, a full three hours after the original puck drop. West Coast hockey fans are going to love this.