Share All sharing options for: 2/26/2004 - The Bartman ball gets destroyed 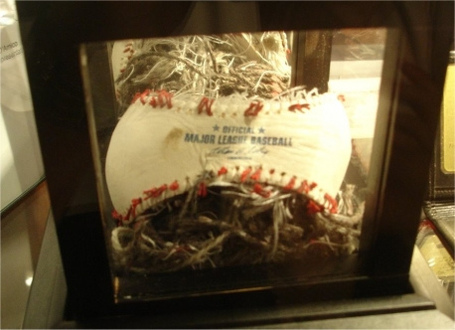 (What was left of the Bartman ball, post-electrocution)

In Game 6 of the NLCS, the Chicago Cubs were five outs away from ending almost a century worth of misery. A fly ball into the left field stands was within Moises Alou’s grasp and was going to bring Chicago within 12 strikes of advancing to the World Series. But then… Steve Bartman interfered. Donning a swastika and a Snidely Whiplash mustache, the evildoer shoved several infants out of the way as he made his way towards the ball. With Alou’s glove extended, the felon brandished his dagger and hacked off Alou’s arm, glove and all, causing the ball to drop. With his task complete, Bartman jumped over the left-field wall and into his 1920 coal-powered engine, where he headed back to his evil lair.

The Cubs then proceeded to blow the lead, and the rest is history. Okay that first paragraph was exaggerated, but the rest is true.

A few months later, restaurant owner Grant DePorter bought the ball for $113,824.16 in an auction from the man who gathered it after it fell into the stands. DePorter purchased it on behalf of the Harry Caray Restaurant for whom he is the manager. The ball was on display for a few weeks before DePorter realized what had to be done; the only way the Cubs were ever going to win again was if the Bartman ball was destroyed. The ball was obviously a symbol of the Billy Goat Curse that had kept the Cubs from the World Series for almost 60 years.

"It's like the ring from The Lord of the Rings and we’re kind of like Frodo, trying to get it over with," DePorter said.

So on February 26, 2004, outside the Harry Caray Restaurant in downtown Chicago, the Bartman ball was displayed for the last time. Shortly before its demise (I’m not kidding about this either), the ball was given a last meal of steak, lobster, beer, and was administered a massage (???). There before several hundred slightly deranged Cubs fans, the baseball was electrocuted into submission, leaving nothing but a heap of string behind.

DePorter thought he had given the Cubs an uninhibited path to the World Series. However that very season, the Cubs lost 7 of their final 9 games to relinquish the Wild Card to the Houston Astros. The curse lived on. With the Bartman ball little more than a bundle of yarn, it now seemed that DePorter’s efforts weren’t quite over -- the ball’s remnant’s would have to be disposed of too.

Almost a year after the ball was destroyed, Harry Caray’s Restaurant announced that what was left of the ball was to be ground up and served on spaghetti. Soaked in Budweiser and vodka (of course), "Foul Ball Spaghetti" was dished out to 746 Cub fans hoping to do their part in vanquishing the curse. The restaurant actually hired a team of scientific advisers to concoct the best way to make the perfect curse-breaking sauce. One of the hires was David Harter, whose company "Sports Curse Laboratory" apparently specialized in prevention, detection, and elimination of sports curses (I bet that job pays well).

Yet here we are years later and the Cubs are still losing. But with even the remainders of the ball gone, what more is there to do? I suppose the next logical step would be to hunt down and assassinate the people who ate the ball. Then if the losing continued, you could burn their bodies and toss their ashes into outer space.