Counterpoint: Is Olympic Hockey Good For the NHL?

Share All sharing options for: Counterpoint: Is Olympic Hockey Good For the NHL?

One of the major storylines to come out of the Vancouver Olympics is Gary Bettman and the NHL governors forestalling the decision to allow NHL players to participate in the 2014 Olympic Games in Sochi, Russia.  Bettman said in an interview with NHL Live!:

"There's no timetable.  The good news is this isn't a decision we have to make for a couple of years. It's a decision we'll make jointly with the NHL Players' Association, the lines of communication between (the NHL) and the International Ice Hockey Federation and International Olympic Committee. We'll work our way through this like we do so many other important decisions."

The reaction from a fans and writers has been predictable, with SB Nation's Zachary Zielonka summed it up nicely:

Obviously the NHL is a business and as commissioner Bettman has stated, it is difficult for his business to shut down for two weeks to accommodate the Olympic break. Even though it may be the case, the benefits of the Olympics have to outweigh the shutdown. Anything that gets the faces of your league on a stage that is seen by millions of people is never bad.

But have the benefits of the Olympics been tangible to the NHL?  After all, the NHL teams must halt business for two weeks and at the same time expose their most valuable assets to injury in games that have no meaning to their ongoing operations.  At the very least, the NHL should see increases in television ratings and attendance, the two metrics that directly impact the bottom line.  Below is a chart of NHL attendance from 1987 - 2008.  The Olympic years are in bold. 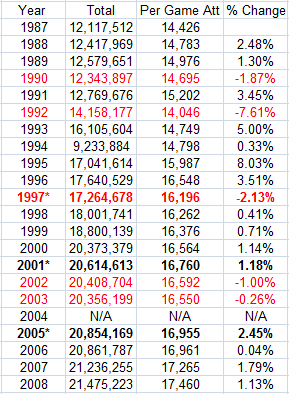 The years marked in red indicate a year-over-year decline in attendance.  Note that during Olympic years, and the years that follow, there is no perceptible "Olympic Bounce".  Perhaps the exposure from Olympic play doesn't have an immediate impact on attendance, rather, the multiple appearances in the Olympic Games have gradually built a following that can be reflected by analyzing the gate totals over time.

So the Olympics don't have a pronounced impact on attendance, what about television ratings?  The NHL is a gate-driven business and any additional revenue from television would certainly be worth the hassle of shuttering the business.  A glimpse at the U.S. Television ratings since 1995 doesn't show much support for putting up with the hassle. 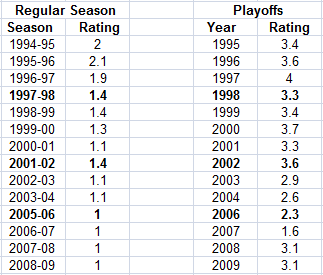 In two of three Olympic years, U.S. television Stanley Cup Finals ratings have declined from the prior year.  Overall, NBC's television ratings of the last two years, though much higher than previous years and pushed by two Sidney Crosby appearances in the finals, have yet to approach the ratings numbers that Fox was able to generate ten years ago.  NBC's confidence in hockey has been exposed this year as only one game, the U.S. vs. Finland semi-final, has been broadcast on NBC.  All other games, even the U.S. vs. Canada matchup during pool play has been pushed to CNBC or MSNBC.

The numbers available for analysis are North American-based and there isn't a way to judge the the effects of Olympic Hockey in European markets.  However, any positive effects of the Olympics could easily be replaced or usurped by a World Cup of Hockey, which Bettman and the IIHF have discussed.  In fact, to increase exposure, the World Cup could be held every two years, rotating through any host country with the arena capacity to handle such a tournament.  The NHL could push to follow the Soccer model and position the World Cup as International Hockey's greatest prize, and as long as the NHL players are playing in the World Cup and not the Olympics, that push would likely work.

It's not often that Gary Bettman is cast as a sympathetic figure, and it's not often that the NHL takes a logical, principled position.  But in the case of continuing the agreement with the IIHF for Olympic play, Bettman and the NHL have a point.  Attendance increases have been non-existent and television ratings have dropped even during Olympic years.  NBC, with a tacit agreement from the IIHF has hampered the NHL from ancillary marketing by keeping all access, coverage and marketing to themselves or severely limiting the NHL in those areas..  The NHL through it's NHL Network programming is limited in showing coverage, highlights, or footage, and they are limited in performing on-site coverage and interviews.  The NHL is in the unenviable position of supplying all of the talent and generating all of the buzz and isn't benefiting from the situation.  If Bettman moves forward with plans for Sochi, the IOC, IIHF and 2014 broadcast partner are going to have to address the marketing and coverage concerns.  Locking the league out of the media rights denies the NHL the long-term benefits that any organization would need in order to enter into another agreement like this.

Point/Counterpoint: Are The Winter Olympics Good For The NHL?