NBA Talking Points: In Defense Of March Madness (A Response To NBA Snobs)

Share All sharing options for: NBA Talking Points: In Defense Of March Madness (A Response To NBA Snobs)

It's March, and that means the NBA takes a backseat among sports fans, and even among most hardcore basketball fans. This is the way it's supposed to be.

The NBA season is already about six weeks too long—the playoffs last almost three months—and after a while, regular season pro basketball fades into white noise. Every night there's a new guy that scored forty, every few games LeBron puts up some absurd statline, and then Kobe Bryant will counter with an ice cold game-winner to remind us he's great, too. There are upsets, there are blowouts, there are highlight dunks, and it's all great. But by March, it's a little bit repetitive.

Which is why March Madness comes at the perfect time. Rather than get burnt out on the NBA, basketball fans can turn our attention to the best tournament in all of sports, and take a break from the ebb and flow of an arduous NBA season. It's awesome. Rather than pretending that any of this stuff is riveting at this point, we can just wait for the playoffs to start in April, and enjoy actual, riveting basketball in March. Besides, a quarter of the NBA is tanking by now, and most of the playoff teams are focused on the grind that awaits them in April.

This is how you have teams like Milwaukee winning in Denver on Saturday, not to mention the Celtics blitzing Dallas on the same night. It's not that teams like Dallas and Denver don't care, but... With a playoff spot locked up and guaranteed six weeks of extra work ahead of them, they don't care that much. And again, it's perfect; right as fans and players get weary of the regular season, March Madness comes along to break the monotony.

But over the past week or so, there's been a little bit of backlash among NBA folks who insist on denouncing the college game as "inferior." And it's really, really annoying. If you loudly proclaim your preference for the NBA to March Madness, than you're either a BIG fan of the pick-and-roll, or you're just lying to be different. Kind of like the people who like to pretend that the WNBA is entertaining, NBA snobs miss a crucial point in all of this: most NBA games are just plain boring. Like, legitimately difficult to watch.

I watch pro basketball because if you can appreciate the context of most of the players and each of the teams, it's fascinating to see each of their narratives evolve in real time. Like Leon Powe's redemption with the Cavs this weekend. After the Celtics abandoned him and his ravaged knee, he signed with the rival Cavs, and after rehhabbing his knee injury for the first four months of the season, this weekend he led all Cavs scorers with 16 points.

That's a pretty awesome story, no? But it also came during a routine blowout for Cleveland, and a game that any normal fan would have slept through.

And if we're being honest, most NBA games turn out like the Cavs-Pistons game. Cleveland won 104-79. If a person doesn't know about Leon Powe's history, there is absolutely nothing compelling about that game. You could watch that, or a overtime game between Purdue and Texas A&M, two teams without much pro talent, but that fought their assess off for 45 minutes on Sunday night. What's the choice there?

I love the NBA. I really do. And criticizing others that love the league is something I try to avoid, because frankly, there aren't many diehards at this point. But the NBA snobs have forced my hand here. Their perspectives are best encompassed by this tweet, from Hardwood Paroxysm's Matt Moore:

Ugh. Moore also added, "basketball's like pizza. It's still basketball. But NBA is like Chicago deep dish versus the NCAA's Pizza Hut." Those views seem pervasive throughout NBA circles. Some of my favorite NBA writers have expressed similar sentiments over the past few days, and it's all pretty absurd.

As someone who loves both levels of basketball, I can say that yeah, basketball's like pizza. And the NBA is definitely the better pizza, except... 75% of the time, the pizza winds up soggy and cold, and the regular season games leave fans catatonic by the third quarter. March Madness may be the equivalent of a drunken slice of generic pizza at 3 a.m., but in the moment, it always delivers. Always always always.

Not every fan is going to appreciate that Leon Powe beat the odds just by making it to the NBA—his family's house burned down when he was seven years old, he was homeless for years, and ultimately wound up in foster care. He also tore his ACL in high school, tore it again in college, and then again last year, as a pro. Each time, he'd been written off. He's weathered all of those storms. That's a pretty compelling story. But if you don't have the time to follow bit players like Leon Powe, then the Cavs-Pistons game just looks like a ho-hum game where the best team in the league killed a heavy underdog, and some guy who makes a million dollars scored 16 points. And just because college basketball's got narratives that every fan can understand, that doesn't make it a Lifetime movie.

For a guy like Ali Farokhmanesh or all of the seniors on Cornell's Sweet 16, this is pretty much their only shot at glory. That's not some melodramatic, made-for-TV moment; it's just incredibly awesome.

What's more exciting? Powe and that Cavs game, or Ali Farokhmanesh pulling up 1-on-4 and draining a shot to kill Kansas? Come on. 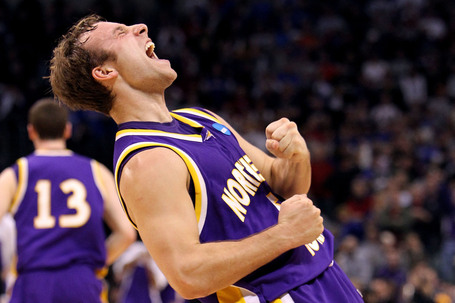 And as far the "NBA as Independent cinema argument"... Regular season NBA basketball is a lot of things, but let's not laud it for its intellectual foundation. It's not about appreciating the "Intricacies of the game." The NBA features world class players, all of whom can hit open jumpers with astounding accuracy, make mid-air adjustments that defy our imagination, and do a million other things reflexively that college athletes struggle with even on their best day. For that alone, the NBA demands our attention.

But as far as intellectual acumen, the games are still essentially 48-minute variations on pick-and-roll sets, and the players are so talented, they can afford to coast for quarters-at-a-time. Anyone that says otherwise is either lying to themselves, or not watching the games. And for God's sake, Mike Woodson coaches in the NBA. Mike Brown! Vinny Del Negro! Nate McMillan! And these are coaches of the good teams...

Let's just put it this way: creativity's not a hallmark of NBA minds. And while the snobs decry college as a game of "pass-pass-pass-take-a-three," the NBA could just as easily be called a game of "dribble-dribble-dribble-drive-get-fouled." Dwyane Wade put his head down and drove through three people... How cerebral!

This isn't to say the NBA's not entertaining. It's my favorite sport in the world, and the playoffs are fantastic. But really. Nothing beats March Madness, and certainly not NBA basketball in March. Again, this is the perfect design. The NBA gets kinda boring this time of year, so we all take a month off and get to watch  one of the greatest spectacles in sports. Don't let the snobs fool you. There's great basketball being played right now, and even when it's a little ugly, it's still better than anything the NBA has to offer. With that, a letter to NBA snobs everywhere...

Dear Snobs: Before your favorite player dominated in the NBA, chances are he played in March. 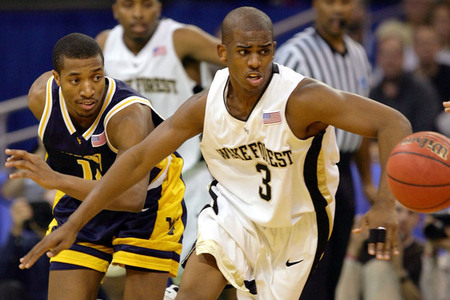 It's the ultimate proving ground for basketball players. Where the stars of tomorrow play today. 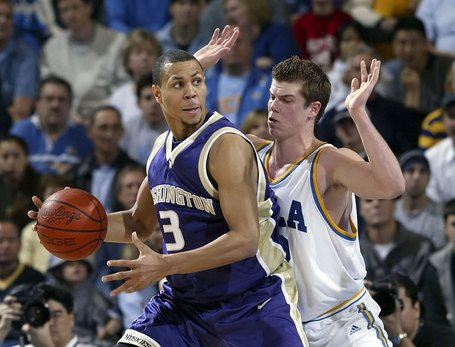 Was college so "inferior" when Brandon Roy was carrying Washington? What about when Paul Pierce was tearing it up at Kansas? 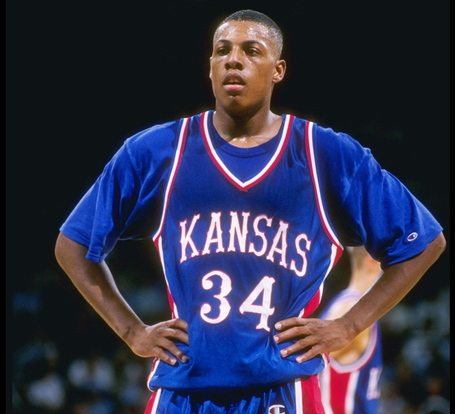 The next few weeks will shape players that'll one day shape the NBA. For better or worse... 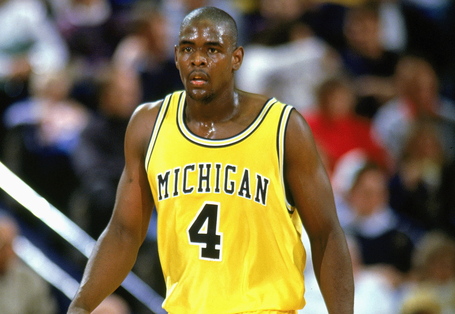 It all matters. So stop whining and enjoy the moment. March Madness is as good as it gets. 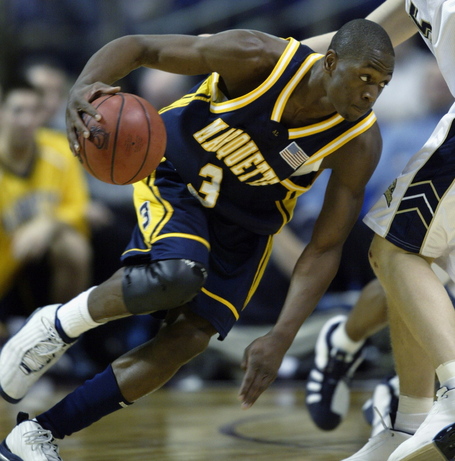 And if you don't believe me, then just ask these NBA stars whether March is "inferior ball."

NBA Talking Points will return on Friday, when we'll be talking basketball movies, Precious with Fake Scoop Jackson, and HBO's How to Make It America. Speaking of which...The theme song to that show is this week's "Song of the Week." Easily the best part of the show:

NBA Talking Points: In Defense Of March Madness (A Response To NBA Snobs)