Gilbert Arenas’s court case may have taken a turn for the worse. Today, prosecutors filed a memorandum asking that Arenas serve no less than three months in prison for possessing illegal firearms. Their new evidence against the defendant? Text messages that Arenas allegedly sent to a teammate, containing instructions as to how to deal with the incident.

Per the Washington City Paper: 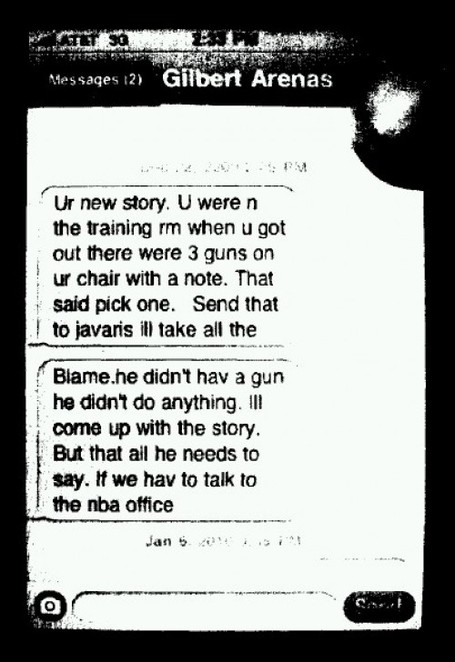 The name "Javaris" refers to former Wizards teammate Javaris Crittenton, who was sentenced to a misdemeanor gun possession charge in the incident. The WCP has a statement from the prosecution, as well as the full story.

Prosecutors write: "Throughout this incident, [Arenas] has provided conflicting, self-serving accounts regarding: why he brought the firearms to the Verizon Center; when he brought the firearms to the Verizon Center; whether Crittenton had a firearm; whether there was a confrontation with Crittenton; or whether Crittenton was even present….The defendant attempts to paint a picture that, from the very beginning, he has fully accepted responsibility, confessed the truth when first confronted, and has been a symbol of cooperation throughout his prosecution. In reality, it is quite the opposite."

GIlbert Arenas sent mass text to friends saying his phone will be shut off in 3 days and if he wanted to talk, he’ll call you, sources say.

Arenas originally pled guilty to felony gun possession charges and is set to be sentenced on March 26th.