Now that Julius Peppers’ signing is official, some of the deal’s financial details have begun to emerge, and… Well, it’s not a recession for everyone. Courtesy of ESPN’s Adam Schefter, here are the contract details:

For those berfeft of addition skills, that comes to a jaw-dropping $83.5 million dollars, $40 million of which is guaranteed over the first three years of the contract. But that’s not even the most shocking part. If you were reading quickly, you may have glossed over the numbers and missed it: in 2010, Julius Peppers will make TWENTY MILLION DOLLARS.

If he matches his career high in sacks—a pretty big if, all things considered—that will average out to a neat $1.4 million per sack. But numbers make everything more confusing, don’t they? The Bears are visual learners: 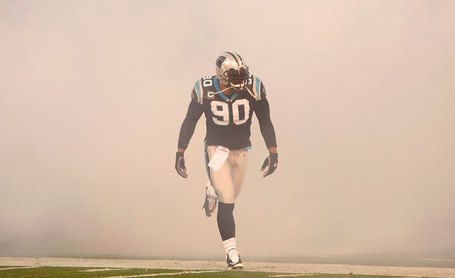 Look at how cool and terrifying he looks coming through that smoke. Totally worth $20 million.

And If the Chicago Bears can afford to pay $20 million to Peppers in 2010, surely they can arrange for him to be surrounded by smoke at all times, transforming him into some fearsome, mystical beast that prompts the opposition to cower as soon as he takes the field. Or, in other words, the type of imaginary defensive end that's actually worth paying $20 million in one year.

Julius Peppers Sheds Light On His Departure From The Panthers