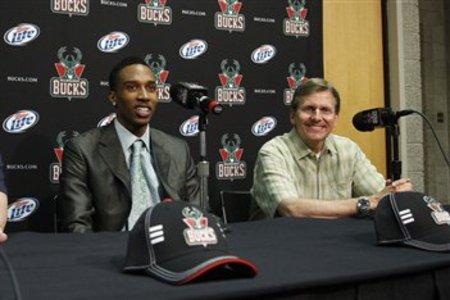 Can you improve a cash-constrained perennial underachiever while letting a big chunk of your talent walk out the door?  It sounds like a stupid question, but based on Hammond's last year in Milwaukee, the apparent answer is yes--if you're smart about it.  Over the course of the summer, Hammond unceremoniously dumped Richard Jefferson for expiring contracts, didn't even make Charlie Villanueva a qualifying offer, and sat on his hands after Minnesota signed Ramon Sessions to a far-from-outrageous four year, $16 million offer sheet.  That had more than a few torch-bearing villagers up in arms, and it wasn't just the impatient fans who were shaking their heads.  Nearly every expert under the sun seemed to take glee in ripping the Bucks' free agency moves, all the while heaping praise on supposedly savvy go-getters like Joe Dumars and Bryan Colangelo.

Working closely with coach-of-the-year candidate Scott Skiles--his first and still most important signing--Hammond instead focused on financial flexibility and on-court discipline, re-signing RFA Ersan Ilyasova after two years in Barcelona, bringing Hakim Warrick in on a one year deal, and signing Carlos Delfino to a partially-guaranteed contract after a year of exile in Russia.  To provide at least some intrigue to the casual fans, Hammond also rolled the dice on high school stud-turned-Euro dud Brandon Jennings, but even that was a high risk/high reward gamble that few expected to pay dividends so quickly.

Hammond also swallowed his pride and declined the 10/11 option of 2008 lottery mistake Joe Alexander, giving him another expiring deal that he was later able to use along with Warrick to acquire John Salmons at the deadline--a fleecing that also came with two future 2nd rounders and the right to swap picks with the Bulls in 2010.  Though Milwaukee was already exceeding expectations at the time of the trade, Salmons has subsequently taken them to another level, adding a capable wing scorer to a hard-working, defensive unit led by Andrew Bogut.  And while the Bucks will need to add more talent to the core of Jennings and Bogut going forward, Hammond has simultaneously managed to dramatically improve the team on the court without sacrificing long-term fiscal sanity.

If this were a career achievement award, or an award that covered the past five years, Sam Presti's got it locked up. Not just because the Thunder are suddenly a playoff team--and look primed to remain in contention for the next decade--because much of the credit there has to go to Kevin Durant. But because, having been dealt a winning hand by the Gods of the draft lottery, Sam Presti hasn't panicked.

Instead of trying to appease Durant by adding a big name free agent, Presti just keeps adding low-cost, highly productive role players. Serge Ibaka, Thabo Sefalosha, trading for Eric Maynor... Hell, even drafting James Harden was a conservative play. And by building slowly, he's allowed his trio of young stars (Durant, Russell Westbrook, and Jeff Green) to come into their own naturally, within the framework of a roster that's built to win for the longterm.

It sounds easier than it is. And now, after avoiding a bunch of spalshy moves in free agency or trades, Presti's Oklahoma City roster looks truly terrifying for the next few years. Durant, Westbrook, Green, Harden, Krstic, Ibaka, Maynor... The list of promising young players is truly terrifying, and yet, completely perfect within the larger framework of that team. 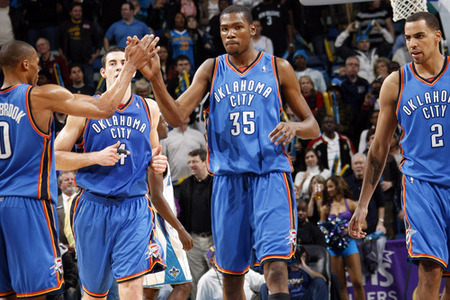 After another year of expert stewardship from Sam Presti, the entire Oklahoma City roster is the splash. The Thunder have the brightest future in the NBA, and it's not even a debate. So, yeah: Sam Presti's had a pretty good year in Oklahoma City.

Yes, Chris Wallace did technically phone in the Hasheem Thabeet draft pick, but Grizzlies fans know that owner Michael Heisley made the call on Thabeet and the failed Allen Iverson signing. Much more importantly, Wallace also essentially traded a cardboard cut-out of Darko Milicic for Zach Randolph, who had his first All-Star season and quickly became a fan favorite. The less noticed offseason moves GM Wallace made – nabbing able backup Marcus Williams for cheap, drafting sixth man Sam Young in the second round, and getting Denver’s first round pick for nothing – had more impact on Memphis’s season then those failures combined.

Any time a team turns over half of the roster and improves by 15 wins, the executive has to be considered for this award. Had the fleecing of the Jazz for elite defender Ronnie Brewer worked out (Brewer had a season-ending injury in his first game), the Grizzlies might still be in playoff picture, which means Heisley probably won’t be passing on the Rookie of the Year again for awhile.

Joe Dumars, your genius shined at the worst of times, but fizzled at the best of times.  You brought Chauncey Billups, Ben Wallace, Richard Hamilton, Tayshaun Prince and Rasheed Wallace to the Pistons, and you were one failed play away from a true Dynasty in 2005.  You defied the odds by building an absolute monster out of table scraps, some of the decade's best players that the league forgot.  You were a genius, building an unparalleled champion out of hard-working, never-quit underdogs who got work done every night.

Since then, I hate to say it, but you've lost your mojo.  You overvalued a player in Rodney Stuckey that will never be a point guard-- and shipped one of the league's best point players to Denver for Allen "Practice" Iverson.  You built cap space, but spent it on two players who allow more points than the 20 a game they can put up.  Joe, you presided over one of Modern Sport's most amazing underdog stories.  That was six years ago.  Today, you've presided over one of the worst, most horrible turn-arounds in modern NBA history by committing one simple crime: you've out-smarted yourself.  You've out-smarted yourself and your roster nearly into the basement of the league's weakest conference.  Sooner or later, the world will forget 2004 and ask boldly, "what have you done for me lately?" 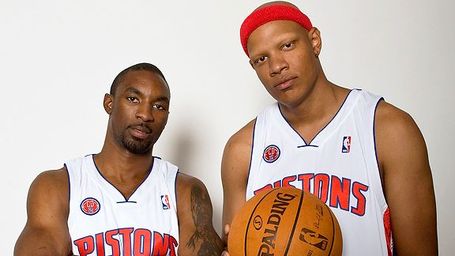 SB Nation's 2010 NBA Awards: As Chosen By The Bloggers Who Know Them Best