Denver Blog On Tim Tebow Selection: 'This Is A Perfect Pick For The Broncos'

Share All sharing options for: Denver Blog On Tim Tebow Selection: 'This Is A Perfect Pick For The Broncos'

One of the biggest questions during the first round of the 2010 NFL Draft was "Where will Tim Tebow end up?" (quickly followed by "What color is Tebow's shirt, exactly?"). We all learned the answer with the 25th selection, when Denver picked the Florida quarterback (as for the shirt: I'm still not sure ... a robin's egg blue? A seafoam green? Whatever, it has shoulder straps and buttons on the arms). 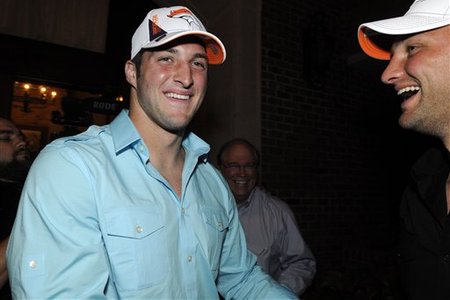 Tebow was clearly someone Denver really wanted, made clear when they gave up a 2nd, 3rd and 4th round pick to move back into the first round to get their man before someone else did (Rich Eisen reported that the Bills camp was distraught when he went to the Broncos). Debate is raging about whether or not this was a smart move by Josh McDaniels and company -- CBSSports.com's Pete Prisco has already said the head coach can kiss his job goodbye because of the pick -- but our Broncos blog, Mile High Report, thinks it is a perfect fit, considering the team is "in need of a long term solution at the quarterback position."

Kyle Orton's contract expires at the end of the 2010 season, Brady Quinn has not managed to stay healthy for a full season of duty, and Tom Brandstater is the most unproven of the group. Tim Tebow didn't come from a pro style offense at Florida by any means, but he has all of the physical tools and intangibles to be a very successful quarterback at this level.

Tebow, despite what some in the media have stated, was a very accurate passer at the University of Florida. He completed nearly 70 percent of his passes in four years with the Gators, and had a touchdown/interception ratio of nearly 9:2.

Tebow is a phenomenal athlete, as he displayed at the NFL Scouting Combine and his Florida Pro Day by running the 40 yard dash in under 4.7 seconds, with a vertical leap at a very impressive 38.5 inches.[...]

Great pick by the Denver Broncos, and oh by the way--they got him a nice new toy in Demaryius Thomas, the wide receiver from Georgia Tech. Not a bad first day for the Broncos.

Not bad at all.