Well that was a fun NBA Playoffs weekend. How about Russell Westbrook? How about Brandon Roy? How about George Hill? How about Jameer Nelson? How about Deron Williams? How about LeBron James? How about Dwyane Wade? There were some pretty memorable individual performances this weekend, don't you think?

I have a theory as to why these great individual performances happen now. You see, the best games of the first round of the NBA Playoffs are the ones where the lower-seeded team comes back home. The atmosphere is different, especially when it's a team that's a much lower seed. The crowd comes out in full force, because they know that those home games could be the only home playoff games their team plays in the playoffs. The higher-seeded team's fans, on the other hand, have bigger goals in mind and expect they'll get more home playoff games in bigger spots, so the enthusiasm just isn't there.

Just look at the difference between Orlando's crowd and Charlotte's crowd in that series. If you ask anyone which home arena has a better regular-season atmosphere, they would all say Orlando. The Magic are a better team, and Charlotte's arena promotions crew leaves a lot to be desired. But Orlando is supposed to beat Charlotte and go deep in the playoffs, so their crowd just won't get that excited until later in the playoffs. Meanwhile, this is what Charlotte's crowd looked like, courtesy SB Nation's Bobcats blog Rufus on Fire.

When you get atmospheres like that, one of two things happen. Either the home team rides their loud crowd to an exciting win, or the road team's best player (or, in the case of Orlando, their third- or fourth-best player), knowing he needs to step up for his team to win, puts forth an incredible effort. We saw both scenarios this weekend, and they were awesome to watch. Hence, a great weekend of playoff basketball.

Anyway, tonight's slate has two Game 4s and one pivotal Game 5. Let's get on with it. 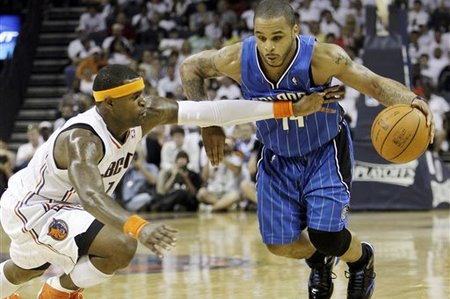 Problem the Bobcats must solve to win: Uhh ... you might want to guard that Nelson guy. Jameer's a good player, don't get me wrong, but this series has exposed his Bobcats counterpart Raymond Felton. Offensively, Felton is being typical Felton, dropping 12 points and 4.7 assists on just 41 percent shooting, but his defense has been just abysmal. Backup DJ Augustin hasn't been any better, continuing a mystifying sophomore slump that's turned him from one of the league's better young point guards to one of the league's worst rotation players.

But back to Felton. He's a free agent after this year because he turned down a reported $7 million a year contract extension offer from the Bobcats, instead electing to play on the qualifying offer and test free agency this summer. This isn't exactly the kind of image he wants to have heading into free agency. Considering the way he's played in the playoffs, we might look back on Felton's decision to turn down that extension as one of the biggest free agent blunders in recent NBA history.

Problem the Magic must solve to win again: The obvious answer would be to keep Dwight Howard on the floor, but that's pretty much up to the mercy of the refs. Howard's been called for a ton of ticky-tack fouls in this series, and telling him to change his play runs the risk of minimizing his impact when he is on the court. But the Magic also need to hold onto the ball, which has become a bigger issue as this series has progressed, according to SB Nation's Magic blog Orlando Pinstriped Post.

If the Magic are to complete the sweep tonight in Charlotte, they'll have to curb their turnovers, which have gotten worse in each game: turnovers ended Magic possessions 10.8% of the time in Game 1, 17.7% in Game 2, and a whopping 24% in Game 3.

Totally inconsequential thing I want to see happen: Larry Hughes improbably had a big game on Saturday, hitting five of his six field goals for 14 points. You know what that means, though. Hughes, thinking he's better than he actually is, will jack up even more bad shots, and this time, he'll miss them. If I were you, I'd follow the #heylarryhughespleasestoptakingsomaybadshots hashtag on Twitter tonight.

Prediction: Charlotte was right there in Game 3 and probably should have won. Spurred by their crowd, I'm expected them to get over the hump tonight. Bobcats 88, Magic 83. 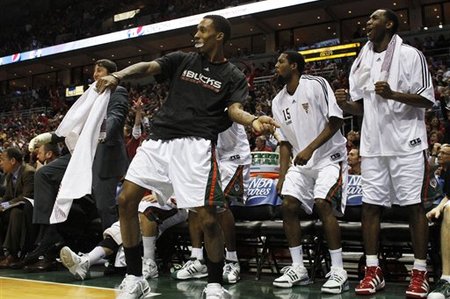 Game 3 in one sentence: The Bucks rode Brandon Jennings' hot shooting and great crowd support to a blowout victory against a Hawks team that didn't really show up.

Problem the Hawks must solve to win: We all thought the Hawks were beyond this whole "take games off mentally" act that has prevented them from being an elite team prior to this season. Apparently, we were wrong. As SB Nation's Hawks blog Peachtree Hoops wrote after Saturday's game:

Mike Woodson bristled after Game One when someone dared talk about the elephant in the room, that being the Hawks ability to be mentally unavailable for parts of games when the Hawks allowed the Bucks to come back in that game.

Wonder how he'll feel tonight when someone mentions that the Hawks, especially in the playoffs, are capable of such uninspired non-efforts such as the 107-89 stinkfest in Milwaukee Saturday night.

Problem the Bucks must solve to win again: Brandon Jennings' numbers don't amaze, but he played under control and threw in great defense to boot. He was bombing away a bit early, but settled down to give Milwaukee exactly what it needed. That has to happen again in Game 4, because the Bucks don't succeed when Jennings is taking too many outside shots.

Totally inconsequential thing I want to see happen: Is it really too much to ask for the Bucks' warmup jerseys to look like the "Fear the Dear" towels handed out on every seat before the game? As SB Nation's Bucks blog Brew Hoop wrote:

I walked into the Bradley Center a couple hours before gametime and saw a red Fear the Deer rally towel draped on each and every seat. Quite a sight, and red was the theme of the day, as the Bucks hosted a "Redfest" in the plaza outside the stadium before the game. Except when the Bucks emerged from the tunnel, they dressed in conventional white uniforms, while the Hawks sported some fresh, red ATL jerseys, making the "red out" at the BC a bit confusing if not still pretty cool.

Let's work on that synergy, Bucks!

Prediction: The Hawks got their "We don't care" game out of the way. Now, they'll take control of this series. Hawks 105, Bucks 92. 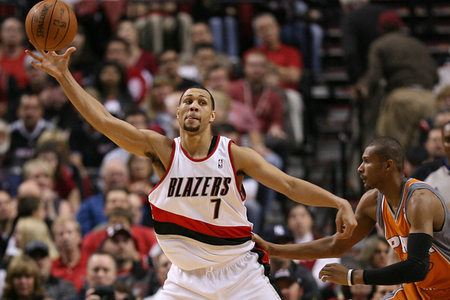 Game 4 in one sentence: Brandon Roy's return lifted the Trail Blazers, as they pulled away in the fourth quarter to tie this series.

Problem the Suns must solve to win: The Suns' perimeter shooters did not shoot well in Game 4, and they seem to believe that's all they need to do better to win Game 5. Truthfully, they're probably right. The shots were there in Game 4 - they just missed them.

Problem the Blazers must solve to win: Portland decided to start Jerryd Bayless over Rudy Fernandez in order to force Steve Nash to guard someone. Bayless didn't play poorly, but he's going to need to play much better to maximize the effect of that adjustment.

Totally inconsequential thing I want to see happen: An elbow-off between LaMarcus Aldridge and Amare Stoudemire. I don't know what an "elbow-off" would entail, but it sounds cool.