Share All sharing options for: Jay Glazer Will Not Stop Until Every NFL Player Trains With MMA 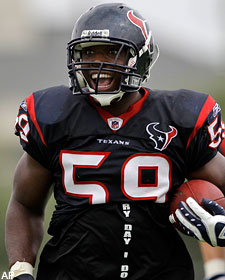 Last year, the world was startled by the news that Arizona Cardinals quarterback Matt Leinart's offseason training consisted of MMA-style workouts with Fox Sports reporter Jay Glazer. Having been involved with mixed martial arts for 11 years, Glazer styles himself of something of an expert. We also discovered that over the years, he's also worked with players such as Jared Allen, Patrick Willis and Keith Rivers. His relatively high-profile status has enabled him to bring elite fighters from the MMA world, including Chuck Liddell and Randy Couture, into the fold. â†µ

â†µHouston Texans defenders are apparently getting caught up in the program. Already reigning NFL Defensive Rookie of the Year Brian Cushing is touting the benefits of working with Glazer. Fellow linebacker DeMeco Ryans has been cajoled into joining up, and Glazer is also eying defensive end Mario Williams as a potential trainee. â†µ

â†µâ‡¥"He's got as much talent as anybody in the NFL. He's so naturally gifted that I know this workout regime would help him. If Mario came here, he'd push himself to levels he doesn't know he has." â†µâ‡¥

â†µâ‡¥"We preach controlled violence," Glazer said. "There's a lot of hand fighting, chopping. If you know what you're doing, your forearms can be like blades. We teach where the nerves are, how you can chop somebody, find the nerve and hyperextend an elbow." â†µâ‡¥

â†µAt first blush, there's one of those priggish journalism concerns that Glazer could be getting too close to certain players, which then might possibly affect his reporting, should one of those players involved with his training be the subject of a story. But Glazer gets around this by being billed as an "NFL insider" by Fox. And journalism has long been one of those fields where the rules of conduct apply only until someone transcends traditional roles and becomes a public figure in their own right. There are plenty of examples within every strand of the profession, so it's far from unique to sports. At the same time, few can doubt, ethics be damned, there's also something to be gained by developing closer relationships with players when it comes to gaining sources. â†µ