Share All sharing options for: Dear Versus TV, You're Pathetic. Love, Lance Armstrong

Generally speaking, it's a cardinal sin in sports television to cut off from the end of a live event to switch to  the beginning of another event. But in these wild times we live in, where money, you know, is a big deal, its hard to blame a TV network for siding with the cash cow.

Unless of course you're Lance Armstrong. 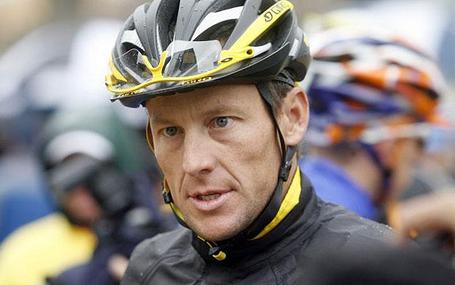 On Sunday night, the Tour of California cycling race was wrapping up in Sacramento just around 7 PM Eastern. The race was complete and the TV crew was simply waiting on the podium ceremony that puts a wrap on the days' stage.  Meanwhile, in Philadelphia, the puck was set to drop on Game 1 between the Flyers and Montreal Canadiens.

Hockey fans, tuning in to watch a crucial playoff game in the Eastern Conference Finals, were furious to see shots of an empty podium with "NHL CONFERENCE FINAL COMING UP NEXT" scrolling across the bottom.

To their credit, Versus listened to their viewers in advance of Tuesday night's Game 2, shoving cycling off to an Internet feed while hockey regained its full time slot. It's not a secret that the most valuable commodity Versus has on its airwaves is the NHL, and for fans of the oft-mistreated sport, it's nice that a TV network actually cares enough to listen to them.

When hockey wasn't popular, hockey fans understood why they were treated like crap, for the most part. There wasn't much complaining when NBC was shoving playoff games off to Versus at the start of overtime in favor of Ian hour-plus of pre-race coverage at the Preakness Stakes.

So, you'd assume that cycling fans would understand that, hey, their sport isn't as popular as hockey, nor does it bring in the same type of money. It's the sad truth, and it means that you have to deal with some inconveniences. One of those inconveniences would have to be switching over to an Internet feed when a race doesn't end before a playoff hockey game is set to begin.

Who's the dumbass @versustv that cut off @AmgenTourofCali coverage w/ a mile to go for pregame hockey?? #pathetic

Stage 5 of the Tour of California -- a warmup race for the Tour de France that has been running for just five years -- is set to be broadcast on Versus from 5 to 7 PM Eastern on Thursday, just before Game 3 of Flyers-Canadiens goes off in Montreal at 7.

It should certainly be interesting to see if Armstrong's star power is a factor when the "dumbasses" over at Versus inevitably have to make this judgment call yet again.