Red Sox Minor Leaguer Waits For Erin Andrews To Accept His Ticket, And (Sigh) His Heart

Share All sharing options for: Red Sox Minor Leaguer Waits For Erin Andrews To Accept His Ticket, And (Sigh) His Heart

There are many ways to woo your lady love, but none is more romantic than holding aside a ticket for her (without her knowing) at the ballpark where your minor league team plays. And I don't mean once or twice. I mean putting aside a ticket pretty much every home game for three years. Will the overpowering force of love compel her to seek out her amorous seat reservation? Or will she merely be tipped off on Twitter by the team's radio announcer? 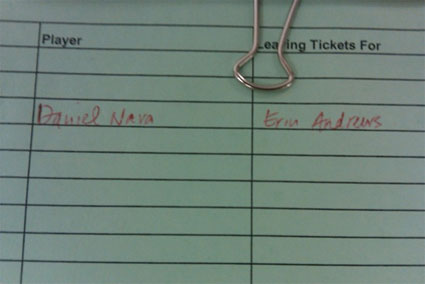 In the case of Daniel Nava, player for the Class AAA Pawtucket Red Sox, it was the less fanciful latter option to get the attention of his beloved, ESPN's Erin Andrews. But, hey, if it ends up working, I doubt he'd much complain.

Unfortunately for him, over the span of his ticket-leaving Andrews has drawn a little bit of unwanted attention from other desirous males, which could likely hurt the already slim chances of her considering his overtures. Naturally, he must now work on his dancing skills so as to win next year's installment of Dancing With the Stars. Actually, I suppose in that scenario he would have to also become famous first. Oh, why must love be so complicated?