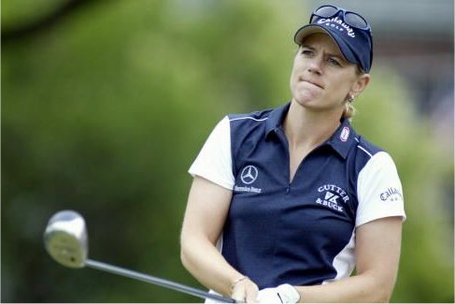 As tremendous a golfer as Tiger Woods was, there was a time when many thought Annika Sorenstam was just as, if not more dominant. In 2002, Sorenstam won 13 of the 25 LPGA events she competed in. She had won five Player of the Year awards, once shot a 59 in a single round, and was the best woman on the tour by miles.

Annika mania reached its apex when she accepted an offer to play at the Colonial Invitational in Fort Worth, Texas. The Colonial was a men's-only PGA tournament; a woman had not competed on a PGA course in 58 years, when Babe Didrikson Zaharias played in the 1945 Los Angeles Open.

As much coverage as her recent excellence brought her, it was miniscule to the hype surrounding her appearance at the Colonial. ''I want to play with the best guys in the world," she said. "I know I'm going to be nervous, but that's all part of the challenge. I just want to play my best game. Then I'll get a true test of where I stand against (the men).''

Sorenstam received an overwhelming show of support from golfers both male and female. Tiger Woods and Phil Mickelson were on board with it, as was President Bush, who said, "I hope she makes the cut." There were some who weren't as objective however. Nick Price, who was the defending champion at the Colonial, called it a publicity stunt and said she should've qualified for the tournament instead of accepting a sponsor's exemption. Vijay Singh, who was one of the top-ten golfers in the world, said "I hope she misses the cut. Why? Because she doesn't belong out here. If I'm drawn with her, which I won't be, I won't play."

Both golfers, particularly Singh, were crucified by the media. Price grudgingly relented by stating, "She's a great gal." Singh apologized as well, but pulled out of the tournament less than a week before tee-off, claiming that he needed a break after playing in four straight tournaments. As you can imagine, his excuse did not go over well. 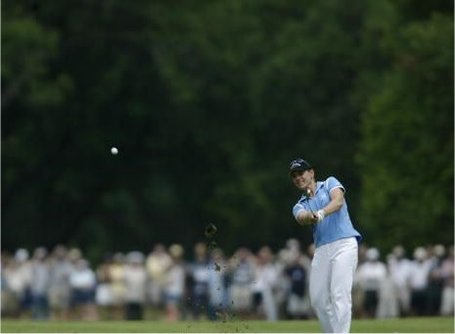 Sorenstam's presence was immediately evident when she began her first round on Thursday. It was uncommon to see a tournament without Tiger Woods so abundant with photographers and reporters. Many of the spectators wore "Go Annika!" pins and frequently shouted encouragingly to her.

In her first round, Annika shot a one-over 71. She was ahead of Sergio Garcia, Geoff Oglivy, Stuart Apleby, and Tom Lehman, and was tied with Nick Price. She was seven strokes behind the leader, but was only one stroke from making the cut.

Her second round wasn't nearly as successful. Sorenstam shot a 74 and finished five strokes behind the cut line. She had chosen the Colonial over other PGA events because of its emphasis on accuracy rather than physical strength. Ironically, Sorenstam was stellar on the fareway and was among the leaders in driving accuracy. Yet she was awful on the green and missed a lot of putts that could have advanced her to the third round.

''I've climbed as high as I can,'' Sorenstam said. ''And it was worth every step. I won't do this again, but I'll always remember this."

It's a matter of opinion whether or not Annika's glimpse with the men was a gain for women's athletics. On the one hand, she proved that the length of a PGA course wasn't prohibitive to her and that she could have made the cut had her putting been better. On the other hand, she did not make the cut and she finished 96th out of the field of 113.

Two months later, Suzy Whaley competed in the Greater Hartford Open. With little to no fanfare following in Sorenstam's footsteps, Whaley shot a 78 in the second round and missed the cut. A few years later, super-prodigy Michelle Wie joined the list of women to compete against the men. Wie would play in four PGA tournaments before she even turned 17, and didn't make the cut in any of them. To date, the only woman to make the cut in a PGA event was Babe Zaharias, more than 60 years ago. But to be fair, less than a handful have tried.