Incoming Georgia QB Hutson Mason Is Ready For His Close-Up

Share All sharing options for: Incoming Georgia QB Hutson Mason Is Ready For His Close-Up

How likely is incoming freshman Hutson Mason to surpass Logan Gray and compete with Aaron Murray for the starting quarterback job? Consider these scientific facts:

• He has diplomatic experience, having recently been an "honored guest at a pool party."
• His name is "Hutson Mason," which binds him by the Two Surnames NCAA Bylaw of 1916 to play quarterback at a brick-and-ivy-laced football school.
• He takes AMAZING publicity photos: 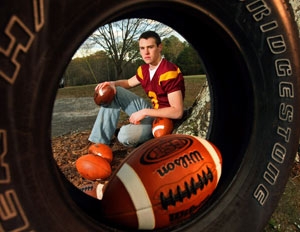 Of course, if he can do anything besides fair catch, he's already outstripped Gray. Somebody get Murray on a vine-covered garden swing, stat.