Statistically, the Lakers' offense was very good in Game 4 against the Suns last night, but in this case, those stats lie. Here's why.

Don't get the wrong idea: I love advanced stats in basketball, and they have amazing utility in analyzing games. This isn't a piece on why these stats are stupid. They're not.

But I do think there are times when we assume some advanced stats are infallible. For example, I think it's possible to be a team that "likes to run" without ranking highly in possessions per game. When the Boston Celtics rebound a missed shot, they immediately pitch it ahead to Rajon Rondo and Rondo does everything he can to get one of his teammates an open shot in transition. To me, that's a team that's good in transition. But at the same time, they also ranked just 22nd in possessions per game this year, which leads many to believe they are actually a "half-court team." Well, no, that's not exactly true. When they force a missed shot, they tend to shoot quickly. When they don't, they run a deliberate half-court offense that drags down their possessions per game figure. Therefore, it's kind of misleading to say Boston is a team that "doesn't like to run" based on their low possessions-per game figure.

So while I love advanced team stats, I do think they sometimes mislead if applied too liberally. This brings us to last night, when the Suns evened up their series with the Lakers at two. Here's what John Hollinger, noted ESPN stat guru, had to say about the game.

Reality check: The Lakers aren't "struggling" against the [Suns'] zone. They just can't stop the Suns.

Hollinger's evidence? The Lakers' offensive efficiency (points scored per 100 possessions) in last night's game was a blistering 119.1, which was well above the league average of 104.9. The reason the Lakers lost, according to Hollinger, is that Phoenix's offensive efficiency was an even better 129.2, which he believes is an indictment on the Lakers' defense, not their offense.

Hollinger's right in one regard: the Lakers' defense needs to improve significantly if they want to win the series. Otherwise, though, he's vastly oversimplifying what happened last night. The Lakers' offense scored a lot of points, but they didn't do so in a way that was conducive to winning. Therefore, it failed, even with those gaudy stats.

Here's a question Hollinger needs to ask himself: how did the Lakers really score so many points? The answer? Kobe Bryant hit some ridiculously tough shots. Just watch this highlight tape, and you'll know what I mean.

Now, if you're the Phoenix Suns, is there anything else you can do on some of those shots? Of course not. If they had to pick places on the floor for Kobe to take his shots, you'd pick a lot of the ones you see in that highlight video. The Lakers were unable to get the ball to Bryant in good spots last night, and Kobe was so good that it didn't matter. That's not good offense, that's just Kobe being on fire.

And even with Kobe playing that well, the Lakers' offense wasn't consistent. They scored just 23 points in the first quarter and 22 in the final frame, when the Suns' bench was outplaying them. In the first quarter, Kobe was biding his time, but in the fourth quarter, the Lakers just couldn't get him the ball. Again, that's bad offense. When you can't get your best player, who is on fire, the ball in a close game in the fourth quarter, you offense is part of the problem.

Finally, last night was also a case where bad offense led to bad defense. The Suns really killed the Lakers in transition, not in the half court. After holding Phoenix's fast break down in Games 1 and 2, the Lakers have really failed in Games 3 and 4. One of the reason for this is that they aren't hustling back, to be sure. But it's more than that. Another big problem is that, thanks to the zone and the Lakers' poor offensive execution, they're shooting their shots in spots that don't facilitate good transition defense. One of the tenants of a properly-run Triangle offense is that it facilitates good transition defense, but the Suns are forcing the Lakers to shoot in spots where they wouldn't if the Triangle was working properly. That means the rebounders are confused, which means the guards who are supposed to drop back in transition are also confused. The Suns are capitalizing on this confusion and creating great transition opportunities for themselves on offense. Technically, that's on the Lakers' defense, but it's really on their poor offense too.

So, to review: the Lakers put up great offensive efficiency numbers mostly because Kobe Bryant was on fire. They did not put up good offensive efficiency numbers based on actually running good offense. Therefore, it's really hard for me to jump on board with a diagnosis that assumes the Lakers' offense is fine. It's not fine, and improving it should be a point of emphasis for Phil Jackson and company if they also want to fix their problems in other parts of the game. 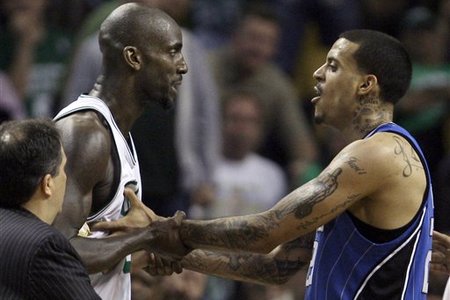 As for the Magic-Celtics series, I think it ends tonight. But before my prediction, let's analyze!

Game 4 in one sentence: Dwight Howard and Jameer Nelson showed up to carry their team and avoid the sweep.

Problem the Celtics must solve to win: Rajon Rondo was very human in Game 4, and that needs to change. He reportedly suffered from some muscle spasms, which might explain why he was so ordinary, but it really hurt the Celtics. Not only did Rondo play poorly offensively, but his man, Jameer Nelson, had a big night. SB Nation's Celtics Blog noticed Rondo's problems as well.

Perhaps the muscles spasms got to him, or his early foul trouble took him out of any sort of rhythm he was hoping to develop, or fatigue is beginning to set in (42 minutes per game through the first three games, including 46 in Games 1 and 2), but Rondo wasn't his usual self last night. He was close to his second straight double-double with nine points and eight assists, but few of his points and assists were definitively impactful last night, with the exceptions being his assists on two of Ray's final three three-point field go als in the fourth quarter and overtime.

Celtics Blog's theory is that the offense ran through Paul Pierce too much, and that stunted Rondo a bit. I agree with that and hope to see a more aggressive Rondo tonight.

Problem the Magic must solve to win again: Rashard Lewis and Vince Carter need to step up. Lewis is sick. Carter is Carter. I'm not holding my breath.

Totally inconsequential thing I want to see happen: Stay normal, Glen Davis, for the sake of us all. Don't do this.