Today in Sports History: May 27th

Share All sharing options for: Today in Sports History: May 27th 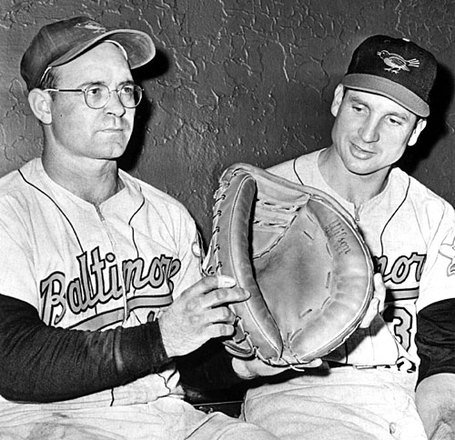 Orioles pitcher Hoyt Wilhelm was a master at the knuckleball. In 1959, Wilhelm led the American League with a 2.19 ERA, but he was so proficient with the pitch that not even his own catchers could handle it; that year, the Orioles produced a major league record 49 passed balls, with 38 coming from pitches Wilhelm threw.

It was such a problem that on this date in 1960, Orioles catcher Clint Courtney -- one of the first catchers in history to wear glasses -- broke out a gargantuan mitt, specifically designed for Wilhelm's pitches. The thinking was that if you used the biggest glove possible, no matter how badly Wilhelm's knuckleball danced, you'd still be able to catch it. With Wilhelm producing 11 passed balls over his last 28 innings, it was worth a shot.

Orioles manager Paul Richards was the man who designed the oversized mutt. "Clint Courtney and Joe Ginsberg flipped a coin to see who would wear the mitt, and Courtney lost, so he had to use it," Richards recalled.

The scheme seemed to work. Though it was the first time Courtney had ever caught Wilhelm, the two produced zero passed balls as Wilhelm pitched his first complete game of the season. The Orioles beat the Yankees 3-2. Afterward, sports writers lampooned the glove, saying that it more resembled a butterfly net than a catcher's mitt. A few years later, Major League Baseball added a rule limiting the maximum size of a glove.

At long last, the Chicago Bulls defeat the Detroit Pistons in the postseason, winning Game 4, 115-94, and advancing to the NBA Finals. For three straight years, the Bulls had gone out in the playoffs to those same "Bad Boys," who were always able to impede them with their patented "Jordan Rules" defense. But the Pistons were getting older and the Bulls were getting better -- the Bulls had won a franchise-high 61 games that year while the Pistons won just 50 games, their lowest total in five years.

"We wanted to play Detroit in the conference finals because we wanted to beat their kind of basketball," said Michael Jordan.

"We felt it was time for the NBA to move on to another style of basketball," said Bulls coach Phil Jackson, referring to the Pistons aggressive method of intimidation. "We're a lot like L.A. and that's good basketball to watch."

The Bulls' sweep of their archrivals signaled the beginning of their championship dynasty, and the end of the Detroit Pistons as a legitimate contender. The Pistons didn't take it well. In one of the most egregious examples of bad sportsmanship, the entire team simply walked off the court without shaking hands with anyone... as time was still on the clock. The final 7.9 seconds were played with only one team on the floor.

Wrote Michael Wilbon of the Washington Post: "At their best, the Detroit Pistons were three-time NBA finalists, two-time champions and all the time worthy of respect, if not flat-out fear. At their worst, which we've seen plenty of over the past week, they were classless thugs who behaved like anything but champions while being swept out of the NBA playoffs by the Chicago Bulls."