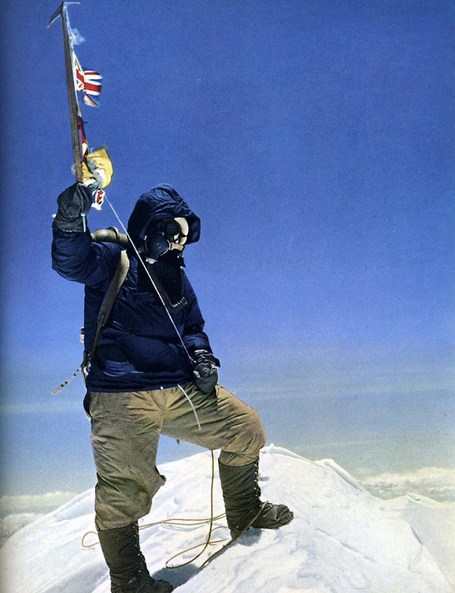 (Tenzing Norgay, on top of the world. Photo courtesy of Royal Geographic Society)

While I don't necessarily consider mountain climbing a sport, what Edmund Hillary did on May 29, 1953 is one of the greatest athletic achievements of all time. On this day, he and Sherpa guide Tenzing Norgay became the first men to climb to the summit of Mount Everest, the tallest mountain in the world.

In 1953, Hillary joined an expedition made up of eight other Brits, a pair of New Zealanders, and Norgay in an attempt to scale the 29,028-foot rock. One year earlier, Norgay led Swiss explorer Raymond Lambert and his crew to within 800 feet of the apex, before poor weather made them turn around.

Using much of the path that Lambert took, the British expedition split into pairs as they traversed Everest's freezing slopes. Though with limited oxygen and equipment by today's standards, the group managed to ascend higher than other party before them. As they neared the top, the decision was made to send the fittest pair -- Hillary and Norgay -- to the top of the world.

The two men escalated above the narrow ridges and steep cliffs before reaching the peak of the mountain at 11:30 AM. Hillary carried a camera with him to document the occasion. The famous photograph of the man raising his ice axe, adorned with the flags of Britain, New Zealand, and the United Nations, into the air was of Norgay, not Hillary. There are no pictures of Hillary on the peak because the Sherpa guide didn't know how to operate a camera. Tenzing left a biscuit, a piece of chocolate, and (as requested by his daughter) a blue pen at the top; Hillary buried a crucifix given to him by a priest.

After a 15-minute stay, Norgay and Hillary began their long descent to the bottom of the mountain. When they rejoined their party, the first person they encountered was George Lowe, Hillary's longtime companion. "Well George, we've knocked the bastard off,'' Hillary triumphantly told him. 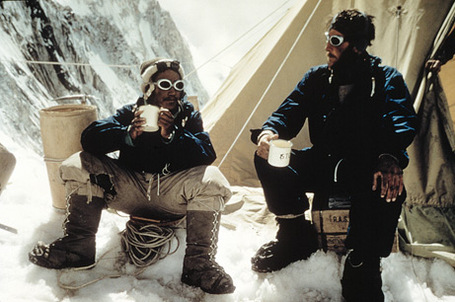 (Norgay and Hillary a day after reaching the top. Photo by George Band, Royal Geographical Society)

When they reached the foot of Mount Everest, Hillary's company was greeted by the adulation of millions. Hillary and John Hunt, the man who led the expedition, were knighted by Queen Elizabeth II, while Norgay was regarded by some in Nepal as the reincarnation of Buddha. Though Hillary and Norgay described their trek as a team effort, the accomplishments of George Lowe, John Hunt, Charles Evans, Tom Bourdillon, and others would soon be forgotten, as eventually would Norgay's.

For years, the two men did not disclose which of them first stepped on the top of the mountain. Norgay eventually revealed that it was Hillary and said, "If it is a shame to be the second man on Mount Everest, then I will have to live with this shame." Only after Norgay's death in 1986 did Hillary admit that he indeed took the first steps.

Hillary attempted other adventurous feats after climbing Mount Everest. In 1958, he successfully journeyed to the South Pole in a tractor, becoming the first person to hike the Antarctica mainland in 46 years. In 1960, he returned to the Himalayas in an attempt to uncover the existence of the Yeti; he returned with skin samples that turned out to be from a goat, and retired his search believing the Yeti to be a myth. In 1985, he teamed up with Neil Armstrong, the first man to step on the moon, in a trip to the North Pole. Hillary then became the first man to stand on the north and south poles of the Earth, as well as the highest point on the planet.

But nothing he did surpassed the fame attributed to climbing Mount Everest, a task once thought to be impossible. Thanks to Hillary's shattering of this invincibility, and a renewed interest in Mount Everest, thousands of people have followed in Sir Edmund's footsteps. By the 50th anniversary of Hillary's historic trip, over 1300 people had successfully climbed to the summit. 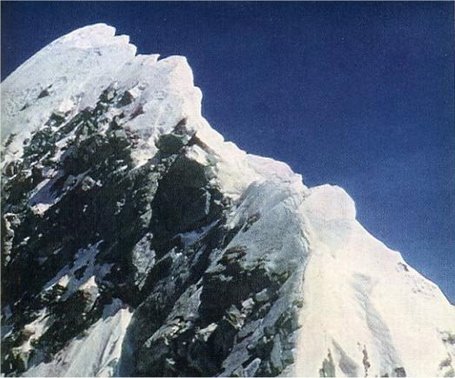 (The summit of Mount Everest on May 29, 1953. Photo by Edmund Hillary, Royal Geographic Society)

Hillary became an environmental activist and tried to repay the Sherpas for their assistance in his journey. In the mid-80's, he was appointed as New Zeland's ambassador to India, Bangladesh, and Nepal. Edmund attempted to dissuade people from climbing Everest in the latter years of his life. Over the past half-century, equipment, food, supplies, and corpses had littered the tallest mountain in the world. In 2008, China announced that they would undergo a massive cleanup of Mount Everest, believing that over 120 tons of garbage had been left behind from mountain climbers.

In 1999, the remains of George Leigh Mallory were discovered 27,000 feet up the mountainside. Mallory and partner Andrew Irvine had attempted several Everest expeditions in the 1920's, and died on the mountain in June 1924. Once asked why he attempted to scale the highest point on Earth, Mallory famously told a reporter, "Because it's there!"

Many have wondered if Mallory was on his descent when he collapsed in the freezing weather. If so, then it's possible that it was he, and not Hillary, who first reached the top of the world. Mallory reportedly possessed a camera of his own, that would have no doubt carried the film of his accomplishment. However, his camera and his film have never been recovered, leaving the height of his ascent to speculation.

In 2008, Sir Edmund Hillary passed away at the age of 88. He died as a person of legend, having first ventured where no man had gone before.