Why Does Everyone Hate John Calipari?

Following this weekend's allegations about Eric Bledsoe's potential NCAA violations, the criticism toward Kentucky's John Calipari has once again been dialed up to full blast. But are we sure that we're criticizing him for the right reasons?

Share All sharing options for: Why Does Everyone Hate John Calipari?

It's odd, really. I understand people don't like John Calipari, but this is all getting a little ridiculous.

Eric Bledsoe's high school coach may have paid for rent and his high school teachers may have given him favorable treatment, so John Calipari's Kentucky program is tainted. Seriously?

Maybe it's just because Calipari looks crooked, with slick hair and quick disarming smile that charms some and arouses suspicion in others. Maybe that's why so many folks are willing to crucify this guy. He's an easy target; he already seems a little shady, so the burden of proof is far diminished.

This weekend, Pete Thamel and Thayer Evans of the New York Times made waves throughout the college basketball world for a rollicking report on Kentucky's Eric Bledsoe, alleging his high school coach had paid for his rent during his senior year in high school, and that Bledsoe may have received preferable grades his senior year, allowing him to qualify to play Division 1 basketball.

The report raised a lot of eyebrows for Calipari-haters, but not much of substance to investigators.

Basically, they talked to a landlord who says Bledsoe's high school coach paid three months of rent, and they obtained a copy of Bledsoe's high school transcript to tacitly accuse his high school of grade inflation. (Yes, you're instincts are correct. That's not completely legal; Bledsoe is reportedly considering a lawsuit against the Times for breach of privacy.) Below, we present the meat of the report, in all its flacid glory.

The state athletic association did not know who was paying rent for Bledsoe and his mother at the house on Center Street South. Axle, the landlord, said that Reddick signed a one-year lease for $400 a month. But she said she never received any money from Reddick or Bledsoe. She said that Ford paid her for the rent three or four times in cash, usually while Axle volunteered at Parker High School.

The New York Times reviewed a copy of Bledsoe’s transcript following his junior year. A veteran compliance officer with no ties to a university involved in Bledsoe’s recruitment said that while it was not impossible for someone with a record like Bledsoe’s to qualify for a college scholarship, he would need "an extraordinary senior year academically" to qualify. The compliance officer spoke on condition that he not be identified because he was not authorized to speak about Bledsoe’s transcript.

Bledsoe’s grade point average in core courses — subjects like math and English that the N.C.A.A. requires — hovered around 1.9 after his junior year, and that included two unusually high grades — an 86 and an 80 — he received during his half-semester at Parker as a junior.

And finally, an "anonymous coach" drops by to toss a grenade:

A college coach who recruited Bledsoe said that Ford explicitly told his coaching staff that he needed a specific amount of money to let Bledsoe sign with that university. The coach, who did not want to be named out of fear of repercussions when recruiting in Birmingham, said Ford told him and his staff that he was asking for money because he was helping pay rent for Bledsoe and his mother.

As far as journalism's concerned, it's okay work. Got some good, anonymous quotes to rile up readers, as well as some anecdotal evidence to allow people to connect the dots. But... Why? What's the point? Why now? Why Eric Bledsoe, who's in the midst of living out his NBA dream? Why Kentucky, when there are about 100 different schools with kids from a similar background, that enjoyed similar perks? Let's take these one-at-a-time.

Why now? Because there's never a bad time to throw rocks at the throne.

The New York Times, rumored to have been investigating Kentucky for months, had to write something after all this groundwork. The NCAA visited Alabama in February to look closer at Bledsoe's eligibility, and the Times has tirelessly tracked the backstory for a while now. For their efforts, they had a landlord willing to go on record saying she received rent payments from someone other than the Bledsoe family, and they had a transcript to prove that Eric Bledsoe wasn't a great student in high school. All things considered, it's not much; but again, after all that work, it'd be so boring to just say, "Something might have happened, but then again, maybe not."

This isn't a call to indict the TImes, but a reminder that we should all remember what's going on here before we indict the Bledsoe family and, by association, John Calipari and Kentucky.

If you were to conduct a months-long investigation into star players from colleges all across the country, chances are you'd find a lot more egregious violations than a few months' rent and a spike in academic performance their senior year. Let's not kid ourselves.

Why Eric Bledsoe? Good question. Maybe they couldn't find anything on John Wall or DeMarcus Cousins? It just seems so out-of-place to attack the reputation of a kid that's universally thought of as a level-headed, mild-mannered kid. This is the great witch at the end of our hunt? 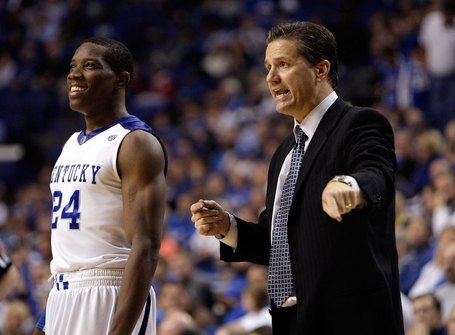 Listen: Kentucky basketball may have bent the rules this year, and lord knows, it wouldn't be the first time for that program. But centering the investigation on the family of Bledsoe—a kid that, by all accounts, worked his ass off and is about to earn a much better life for himself and his family—just misses the point. Even if the vague allegations are 100% true... Who really cares? Where's the victim?

So a D-student became a B-student his senior year, allowing him to go to college? Doesn't that happen to non-athletes all the time? And can we really blame teachers for affording him the benefit of the doubt? Bledsoe used his time in college to catapult him to the pinnacle of his chosen profession, so it's not as if the teachers' faith has been betrayed. And for God's sake, let's not pretend that Bledsoe is the first athlete to get serious about academics during his senior year in order to qualify for college sports.

Scolding corrupt coaches is one thing, but in skewering Bledsoe's name with a bunch of second-hand allegations and no proof, we risk sabotaging one of the system's better success stories.

Why Kentucky? Why John Calipari? Ahh, the great, big, blue elephant in the room...

Kentucky, as the winningest program in college basketball history, is no stranger to scrutiny. But with Calipari, you knew it was going to hit a whole 'nother level. For one thing, he's had this happen before. At UMass, his star player was found guilty of accepting improper benefits from an agent. At Memphis, his star player was deemed ineligible after they found out his SAT scores were falsified. And now at Kentucky, there's the irregularities with Bledsoe.

But again, none of these problems are unique to Calipari's players. This stuff happens all the time in college basketball. Since we're picking out random point guards with potentially shady academic histories, why not look at Sean Dockery, a Duke recruit that had a GPA slightly over 2 and an ACT score of 15 going into his senior year. How did he qualify for Duke? Was there preferential treament? 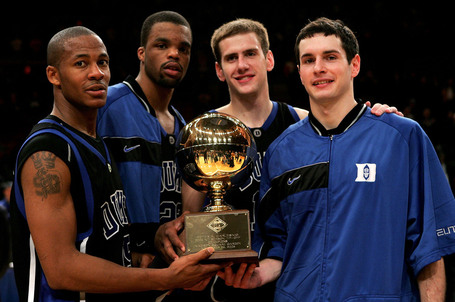 We could play this game with hundreds of college players and programs across the country, but Calipari gets a closer look. Why? Because he does things differently.

His tenure at Memphis represented a shifting paradigm next to college basketball's conventional wisdom. For Calipari's teams, you could argue that the name on the front of the jersey isn't always as important as the name on the back. His offensive system is relatively simple, and designed to highlight individuals, spitting in the face of college basketball's traditional, team-first ethos.

Equally galling, while the rest of the country shuns some of the shakier one-and-done prospects on the market, Calipari makes no apologies for accepting all-comers. If you're a star basketball player, Calipari will find a spot for you. And because of his offense, he can offer the best prospects in the country a chance to showcase their skills like no other. Even if it's just for a year, Calipari can stockpile talent by offering opportunities that other, more rigid college coaches simply cannot provide.

Can you win National Titles with a handful of superstar freshman? So far, he's come up empty, and the traditional paradigm—with a team like Duke, full of upperclassmen—remains dominant. But how many blue chip recruits will it take before Calipari breaks through? Now that's he recruiting at Kentucky, with a rabid fanbase and state-of-the-art facilities, he's likely to become even more of a juggernaut. How long 'till that forces everyone to step back and wonder, "Maybe his way works better." That's the fear of college basketball purists, anyway.

And as far as the Bledsoe allegations are concerned, this philosophical tension is moot.

But it does explain why certain writers might want to connect the dots to Calipari in this case, and turn a blind eye elsewhere. Because Coach Cal, even if he's playing it strictly by the book, inherently undermines the whole system in college basketball. And now he's plying his devilish trade at the most hallowed basketball program in the country?!

Relax. He's just a coach, with a particular philosophy that rubs a lot of people the wrong way.

And Thayer Evans and Pete Thamel are just New York Times reporters that seem to have been rubbed the wrong way. Same with ESPN's Pat Forde, who penned a 2,000 word warning sign to Kentucky when they hired Calipari, earlier this year suggested John Wall might not be eligible to play college basketball, and will likely take to his pulpit in the coming days to offer another sermon on the evils of Calipari. (You've been warned.)

And in the end, Eric Bledsoe's just like one of a thousand kids across America and grassroots high school basketball. He probably had some help getting through high school and into college, where he realized his lifelong dreams and made his family millions.

If real rules were broken and somebody can step forward to prove it, then fine. Prosecute everyone involved to the fullest extent of the NCAA's massively hypocritical bylaws. But until then, the characters in this purported morality play don't seem all that unique. That is, except for Calipari.

I wonder why he's the one that everyone always wants to blame... 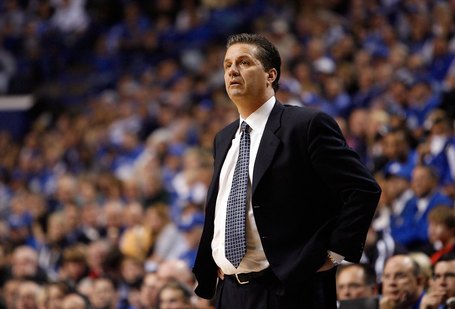