If John Wooden broke the rules, there's probably something wrong with the rules.

Share All sharing options for: Reggie Bush Scandal Shows The NCAA Should Give Itself The Death Penalty

He was known for his work as a basketball coach, but when he passed away, we mourned the loss of a person. A pillar of integrity, a holdover from a simpler time, in an era that's fallen prey to decaying principles. And as the soul of amateur athletics continues to twist in the wind, it's the soul of someone like Wooden that reminds us why we're fighting to protect this stuff in the first place.

He could have wrapped himself in banners and bathed in the fame that came with his success, but he remained right-sized, taking pains to remind himself and his players that the present is a gift. 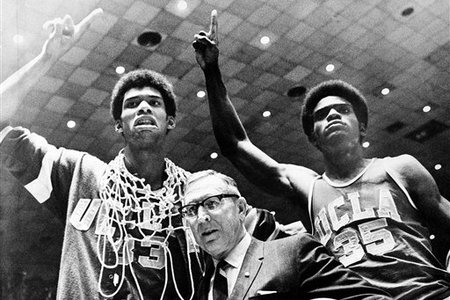 Wooden's UCLA program cheated. You can read more here, you can Google "Sam Gilbert UCLA," or you can find the L.A. Times and NCAA investigations that landed UCLA on two years' probation. A 1978 book by Jack Scott, Bill Walton: On the Road with the Portland Trail Blazers, painted a definitive picture.

"It's hard for me to have a proper perspective on financial matters, since I've always had whatever I wanted since I enrolled at UCLA."

"I hate to say anything that may hurt UCLA, but I can't be quiet when I see what the NCAA is doing to Jerry Tarkanian... The NCAA is working night and day to get Jerry, but no one from the NCAA ever questioned me during my four years at UCLA!"**

This isn't about tearing at Wooden's cloak of immortality. But it's not a matter of debate as to whether Wooden's fabled "Pyramid of Success" overlooked a key aspect of the Bruins' historic dominance in the 1970s.

A booster named Sam Gilbert, once accused of laundering drug money, "arranged and paid for abortions for players’ friends and helped athletes get discounts on cars, stereos and airline tickets," according to reports cited in this New York Times article. We know this.

But we cherish his memory, with talented writers like Dave D'Alessandro writing, "He represented another era, and more than anyone else, he was of his time. There will never be another like him."

(** Separate quotes regarding UCLA's transgressions were originally attributed to Bill Walton, as they were in this 2006 article from Yahoo! Sports, but since publication, we received a complaint from a third source regarding UCLA's involvement. We have since tracked down the book, which was out of print, and corrected the quotes. They have been removed from the Yahoo! piece.) 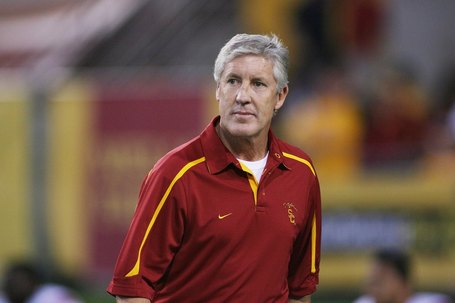 Juxtaposing Pete Carroll with Wooden borders on blasphemy. The New York Times Magazine once wrote, "John Wooden comes as close to an embodiment of Jesus Christ as anyone on the current sporting scene."

Next to him, you have the snake who ditched USC as soon as he sensed the NCAA hammer coming down.

But last Thursday's report from the NCAA infractions committee—centering on the dynastic stretch of Carroll's tenure at USC—demands drastic measures. And whatever blasphemy underpins the Carroll-Wooden pairing, it pales in comparison to the heresy from the NCAA, as college sports' governing body ignores reality.

Here's this from the NCAA's sermon:

This case is a window onto a landscape of elite college athletes and certain individuals close to them who, in the course of their relationships, disregard NCAA rules and regulations.  [...] Their world included professional sports agents, "runners" and "handlers," "friends" and family, many of whom were eager to cash in early on expected lucrative professional contracts. The actions of those professional agents and their associates, with the knowledge and acquiescence of the athletes, struck at the heart of the NCAA's Principle of Amateurism, which states that participation in intercollegiate athletics should be "motivated primarily by education and by the physical, mental, and social benefits to be derived." Their actions also threatened the efforts of the NCAA and its member institutions to sponsor and support amateur competition at the collegiate level.

The idea that sports agents could strike a fatal blow at a "Principle of Amateurism" seems reasonable. Same with the notion that "participation in intercollegiate athletics should be motivated primarily by education, and by the physical, mental, and social benefits to be derived." But coming from the NCAA, downright insulting.

Sure, participating in amateur athletics should be motivated by those things, but what about the people governing them? How can an organization that exists to generate revenue from intercollegiate athletics tell athletes that their sole purpose is to be gratified with "physical, mental and social benefits?"

For one, there's Reggie Bush. He created this mess. You can read the entire timeline here. Bush's family accepted cash, a car and a house from a marketing firm, all with the implication that after finishing at Southern Cal, Bush would provide a return on this investment, signing with the firm.

To the virgin ears of the NCAA, that sounds apocalyptic. He used his talent to move his family into a better home? The audacity!

It was a business agreement. The problem arose when Bush and his family abandoned the deal, leaving his would-be agents without a client, having wasted hundreds of thousands of dollars on what was the advance to Bush's professional contract.

Without any leverage, the agents threatened to go public with proof that Bush had violated NCAA guidelines. And when Bush still refused to pay, the agents followed through, talking to Yahoo! Sports in 2006, prompting an investigation and leading us to present day.

As for the agents, this is what happens when you traffic services among amateur athletes. We don't have to condemn them for treating college football like a business, but we shouldn't console them for finding out that a "wink-and-a-handshake" deal with a 20-year-old could go awry. 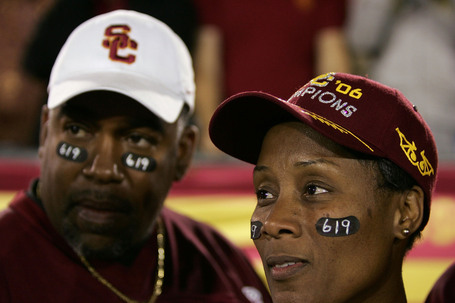 And then there's USC's athletic department, with its see-no-evil histrionics. A college is a small place. An athletic department is even smaller. To think that members of the department had no idea that the biggest star in their midst might be taking benefits—driving a nice car around campus, commuting to a nice house to visit his family—is fucking ridiculous.

An entire staff of coaches recruited Bush. They became intimately acquainted with his family, then micromanaged his activities in college. It's not like it's impossible to keep track of 100 players, let alone one of their most recognizable faces.

There is a systemic problem facing college athletes today: unscrupulous sports agents and sports marketers. The question is how do we identify them and keep them away from our student-athletes? To provide us with recommendations about the best way to protect our student-athletes and their families from those who seek to violate the rules, we have retained the Freeh Group, headed by former federal judge and ex-FBI director Louis Freeh.

Our success in athletics and the outstanding individuals we recruit make our student-athletes an attractive target for those seeking to take unfair advantage of them.

Never mind that Carroll approved an internship for Bush with Reebok consultant Mike Ornstein, a marketing agent whom Bush later signed with. Never mind that Bush's would-be agents—the ones funneling his family hundreds of thousands of dollars—were visitors to the USC locker room on two occasions.

And finally, there's Carroll. Of all the people involved, Carroll probably bears the least responsibility. It's laughable to think that he didn't know, but what did he do wrong? Carroll's job is to take care of his players, win games, and help build the profile of the University.

Look back at Wooden again. If we're going to asses the character of coaches like Wooden or NC State's Jim Valvano independent of their NCAA transgressions, we can't condemn someone else for operating under the same principle.

Thursday's denials from USC were as arrogant as they were absurd, but as for Carroll's role in propagating that narrative the past few years, what else would you have him do?

Should we vilify him for pursuing other opportunities, signing with the Seahawks for $35 million? But keep in mind, that borrows from the same logic that governs NCAA athletes; the idea that we should all forsake personal gains in the name of protecting an illusion.

In time, we'll see this investigation as no different than what happened at Alabama in the '90s or Miami before them. Focusing on USC misses the point. What happened was a symptom, not the disease.

What's the lesson? The NCAA exists to manage the business of college athletics, not to preserve integrity. How do we know this? With regard to the postseasons in their two revenue sports, the NCAA's members occupy complete opposite ends of the spectrum. With football, it's all about tradition and the regular season; in basketball, the regular season and tradition are dismissed for a tournament. The common denominator: 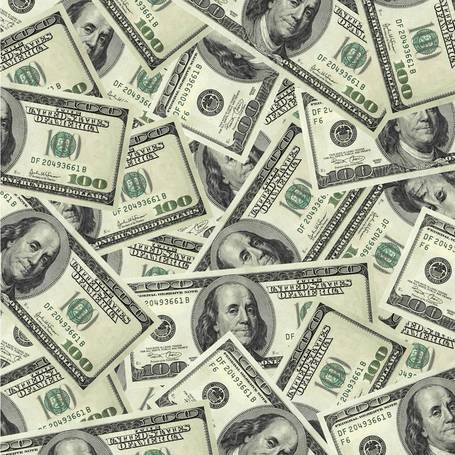 One of the greatest ironies is that the same people who would scoff at the notion of paying athletes are the ones who look to Wooden as a paragon of what coaching should be. Yahoo! Sports' Dan Wetzel has been the principal reporter who opened Pandora's Box at USC. In 2006, he penned a lengthy column on the matter urging the NCAA to "Take Back The Title." This past week, he also weighed in on Wooden:

He represented a simpler time in sports, when coaches comported themselves with calm and class.

He did the things no one does. He was a constant in the swirling tides of change, a reminder of another way of living, a simpler way of conducting one’s business. He coached to coach, not for big contracts or endless fame.

Read those quotes from Bill Walton. Guess where I got that quote? A 2006 article by Yahoo's Dan Wetzel, nine months before he called for USC to forfeit its title. His conclusion, about the Bruins:

There are no angels in this business, no white hats and black hats as the NCAA would like people to believe with its public relations campaign of a rule book. Everything is a shade of grey. Everything is situational ethics. Everything is pick your poison.

But with USC it's different. From Wetzel's "Take Their Title" column:

And now the NCAA needs to take something, too – Bush's retroactive eligibility and a season and a half of USC victories, setting in motion the BCS' removal of the Trojans' 2004 national championship and the Downtown Athletic Club's repossession of Bush's 2005 Heisman Trophy.

Anything less, any bit of situational justice, would be a slap in the face of fair play and another in the NCAA's long history of double-standard enforcement.

The NCAA's hypocrisy can tie the best of us in knots.

End the farce of "amateur athletics." Nobody's fooled. Pay the players that make all this prosperity possible.

Wooden put it best, I think. "Failure is not fatal, but failure to change might be."