Univision: Watching World Cup 2010 In The Key Of Caliente

Share All sharing options for: Univision: Watching World Cup 2010 In The Key Of Caliente

Let's credit ESPN first before telling you contradictorily why you should not watch their coverage of big games. The Worldwide Leader has poured cash onto these games in unprecedented fashion. Gone are the days of letting the B-team do games and providing half-coverage of the tourney; instead we have Chris Fowler and Bob Ley in studio, handing the baton off to FIFA and Premier League stalwarts Martin Tyler and Ian Darke for the play-by-play. This is champagne class treatment for the event, and though it is long overdue it remains welcome and deserved fawning indeed for the World Cup fan at large.

Still, even with all those nice things said about ESPN's work with the Cup, you should be stretching the limits of your high school Spanish and watching Univision, the wacky antipodes to ESPN's serious business approach to broadcasting the World's largest sporting event. Why should you abandon all understanding and dive directly into the lunatic end of soccer broadcast in a language you may not even speak?

1. Because fun is priority uno.

Very little is taken seriously on Univision. Broadcasts typically begin in a crowd setting with buxom dancing ladies stepping a light meringue step around their male counterparts. At least three to four sentences of patter are spoken. Then, conversation with a puppet about the match begins. 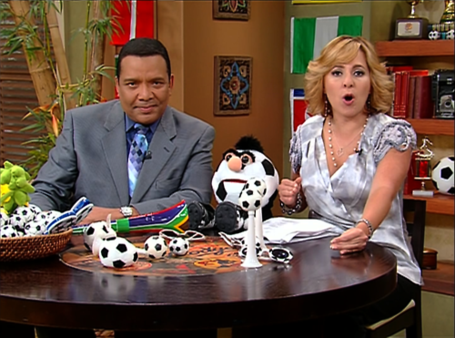 That is not a one-time gag: that is a puppet who makes regular appearance on Univision's soccer broadcasts, and who is a former elected official from the Mexican state of Oaxaca. They speak for a while, and then food and beverage are passed around the set before the stars of the show take turns dunking each other in a dunk tank. I am not making any  of this up, since this is all taken directly from the script of Friday's opening match programming.

It makes no sense whatsoever, but it is ridiculously fun. Mind you, we're not even talking about Republica Deportiva yet, which is Univision's "non-serious" sports show. Everything we just discussed is the serious business, which is run kind of like a festive cookout with hired dancers and good catering. (More on RD in a minute.)

2. Because Fernando Fiore compels you. I can't explain the man's charisma. You either see it and nod appreciatively, or you are soulless and have an empty, howling space in your heart where good things are supposed to live and make you capable of love and human empathy. This picture is the clinical test to see which category you fall into: 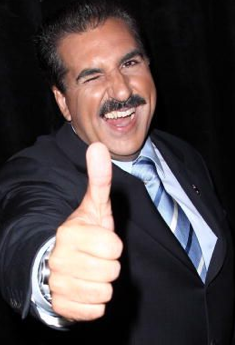 If that doesn't reek of magnificence, you have no soul. If it does, you're on Team Univision.

3. GOOOOOOOOOOAAAAALLL. You may not understand the Spanish, but enthusiasm and mania need no translation. Pablo Ramirez does a fine Andres Cantor-style GOOOOOOAAAAL call, and for the high-grade stuff will break out the "GOLAZO," which is a special occasion best paired with chilled vodka and beluga caviar. He also will occasionally sing the names of players, as he did with South Africa's Tshabalala, whose name he warbled with an emphasis on the first syllable and a finishing Michael Jackson-ish "OW!" at the end. The pairing with Chilavert is even better, since even barfloor Spanish can pick out the two blatantly pulling for one side and accusing the other of committing minor felonies on the pitch

And when Ramirez screams "EN VIVOOOOOOO!" at the beginning of each broadcast? You'll start to crave it like a drug.

4. They have HD, too. No real loss in picture quality if you decide to re-up with Team Univision. (Okay, there's a slight difference, but unless you're really, really picky you won't notice.)

5. You'll be astonished at how little you're missing without English. Having watched at least twenty matches on Univision over three World Cups at this point, you'll be stunned how little information announcers add to the images you're seeing. Only on a few occasions in eight years have I had to flip over to ESPN to clarify a ruling or point, since the basic events of the game are so self-explanatory. Better still, the Univision announcers are so enthusiastic they usually say things loudly and often enough that you get what's happenings, as they did during the Cote d'Ivoire/Portugal game when Drogba came in late in the second half.

6. Republica Deportiva. Fiore's baby, and the two hour fiesta which, as far as I can tell, consists of nothing but dancing ladies in very little clothing asking each other "Do you like [INSERT TEAM HERE] better than [INSERT OTHER TEAM HERE]?" in between festive in-studio dancing and long, flirtatious conversations with significantly less attractive male hosts. The women are called the Senadoras, because like the commentary puppet they are also elected officials in several different Southern and Central American governments. It is ridiculous, festive, poised well over the line of bad taste, and is way more enjoyable than watching Bob Ley introduce morose pieces about the history of South Africa.

Do all of these things make Univision less instructive than ESPN? Sure, but I can't hear you over all the conga drums going off in here, so shut up and dance, amigo.  The puppet will be buying drinks all night long.