With the first pick in the 2010 SB Nation NHL Mock Draft, our Edmonton Oilers bloggers at The Copper & Blue select... 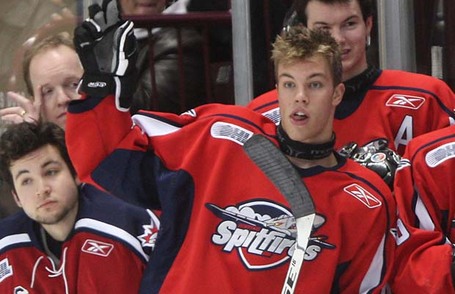 Here's what Scott Reynolds at The Copper & Blue has to say about Hall, and their choice to take him over Tyler Seguin:

Seguin's improvement now doesn't seem to suggest that he will continue to improve more as time goes on than Hall.  And at this point, that's why I still favour Hall.  Hall's points per game this season was 1.85 compared to 1.68 for Seguin.  Including playoff results, the gap swells to 1.85 and 1.61.  That strikes me a pretty non-trivial difference.  I understand that the goal is to pick the guy who will be the best in five years and not the guy who's the best today but so far I haven't heard any reason to believe Seguin is the one who's more likely to improve.  If there's no reason to believe one guy has a better chance at improving than the other, you may as well take the guy who's better today.  And it would seem that the guy who's better today is Taylor Hall.

They're still lobbying for a trade over at C&B, and despite the reality that it could actually happen in the real draft, we're not allowing it. The Edmonton delegation will have to accept that reality or feel the wrath of The League.

The Boston group from Stanley Cup of Chowder is on the clock.