With the second pick in the 2010 SB Nation NHL Mock Draft, our Boston Bruins bloggers at Stanley Cup of Chowder select... 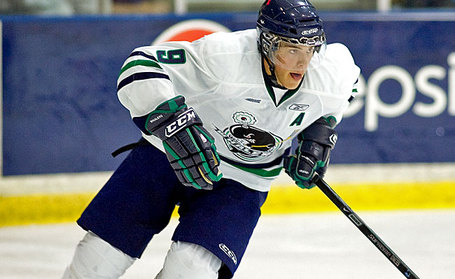 From Stanley Cup of Chowder:

I'm not going to sit here and act like an expert on a junior hockey player I have never seen play. All I know is that Taylor Hall and Tyler Seguin are the class of this year's draft. The Copper & Blue selected Taylor Hall with the #1 pick, so we were stuck with NHL Central Scouting's #1 ranked North American skater.

According to what I have read and heard, Hall is more of a pure goal scorer, while Seguin is more of a playmaker, who makes the players around him better. I think the Bruins need more of what Taylor Hall brings, but if the Oilers take Hall, the B's are still getting a special player in Seguin.

The 6'1" 172 lb centerman finished first in the OHL with 106 points this season (48-58-106) and was awarded the Red Tilson Trophy this season as the OHL Most Outstanding Player.

Head over to Stanley Cup of Chowder for the full rundown on Seguin.

Florida, via Litter Box Cats, is on the clock.