USA Vs. Slovenia: A Pair Of Matching World Cup Disgraces

Share All sharing options for: USA Vs. Slovenia: A Pair Of Matching World Cup Disgraces

Let's get this out of the way first: there's no way the United States can blame the refs for allowing two goals in the first half against Slovenia. Doing so would discredit both the Slovenians' effort and the atrocity that was U.S. defensive marking, especially Oguchi Onyewu getting straight up beaten on multiple occasions. For a half, the U.S. played despicable soccer while the Slovenians romped.

That all happened, and is indisputable fact displayed by the cold math of the scoreboard. This was the first disgrace of this game.

The second disgrace came in the 86th minute when referee Koman Coulibaly called a foul against the United States in the middle of this rugby scrum: 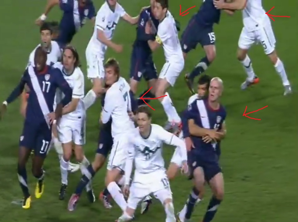 There are other places for fans to react with comments such as "it's his call" and "I didn't see it clearly." But not here. I've watched the replay 10 times, and the call is the second and most glaring disgrace of this match, a flaming dead donkey of a call thrown into the face of sane officiating, a crapulent fiction written by a temporarily insane arbiter obviously high on dangerous street pharmaceuticals, a blatant crime against logic, fairness, and the otherwise fine reputation of the sensible people of Mali and West Central Africa, an "artless theft" as the announcers put it, a smash-and-grab without even the courtesy of a ludicrously creative explanation, an alpaca out of nowhere, a pissant sportocrat's petty and miserable entry into the annals of soccer history, a permanent disinvitation to my extremely exclusive Christmas card list, and the man who finally united Tunisia and the United States in a unilateral agreement on one thing: that you suck, and suck forever, and should be allowed no supervision over anything more complex than an armwrestling match between quadruple amputees.

Or, you know, maybe there was a foul. Maybe my eyes missed the bear hug a defender gave Michael Bradley, or the two other clear Slovenian fouls the ref missed in the box in favor of citing the unsafe length of Maurice Edu's fingernails in disallowing the third and decisive goal in what would have been an American comeback victory. Maybe I shouldn't have just FedEx'd a box of rattlesnakes to Coulibaly's hotel room, but what's done is done. We all make our calls and have to live with them.

But right now I hate Coulibaly with the power of a thousand burning angry suns in the way that only a fan wronged by an official can, and would happily clip the lever to drop a train covered in angry bees and anthrax on him. That may seem unfair given his difficult role as a referee judging a fast game, but I'd just put it this way: we have different interpretations of the rules, and have evaluated them differently.