Our newest regional site, SB Nation Pittsburgh, starts its inaugural top-five feature by reminding us that it's a city with three professional teams.

See, for all of the city's successes on the gridiron and the ice, the Buccos have struggled to win -- much less draw a crowd -- for nearly two decades. And check the National League standings: There they are again, sporting the worst record in the league, sitting 13 games out of first place in the Central. The Pirates last finished with a winning record in 1992, when they lost in the NLCS for the third consecutive year. This summer, they're working on their 18th losing season in a row. The Somali pirates win more often (and get better press).

So maybe the Pirates and their remaining, loyal fans should be pleased that Editor Charlie Wilmoth and Co. included young Andrew McCutchen in their list of Pittsburgh's five most popular athletes. He's truly a gem of an outfielder, a five-tool "giant bottle of Rolaids," according to the SB Nation Pittsburgh crew. Put him at the plate, and you've got all the excuse you need to visit beautiful PNC Park -- perhaps the finest ballpark in the majors. 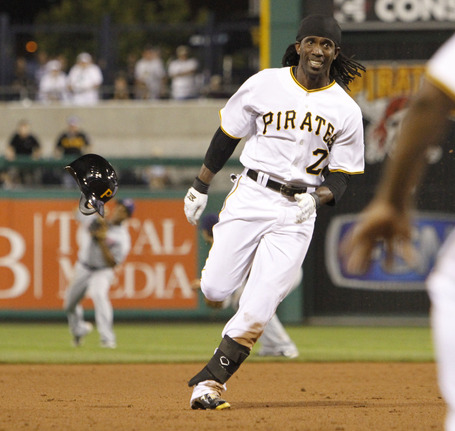 It also serves as a reminder of why you should bookmark SB Nation Pittsburgh and come back for more if you're a Steel City sports fan. They'll aim to aim to please. ... unless you're a James Harrison fan, I suppose.

So rather than rehash who the city's most popular athlete is among the remaining Steelers and Penguins, let's dive into the home dugout and pick another Pirate. And we're taking McCutchen out of the mix. Here's a hint -- if you've heard of one of these guys, click and vote!