Paralysis By Analysis: The Derrick Favors Vs. DeMarcus Cousins Debate Is Why The NBA Draft Is Amazing

Derrick Favors or DeMarcus Cousins? The question has dogged NBA general managers and fans for months, and less than 12 hours before the draft, we still don't know who will be the better player. Isn't that what makes the NBA Draft great?

Share All sharing options for: Paralysis By Analysis: The Derrick Favors Vs. DeMarcus Cousins Debate Is Why The NBA Draft Is Amazing

NEW YORK -- Imagine you were tasked with creating the perfect big man, the one player who would dominate the NBA for the next 10 years. Chances are, he'd bring the following things to the table: 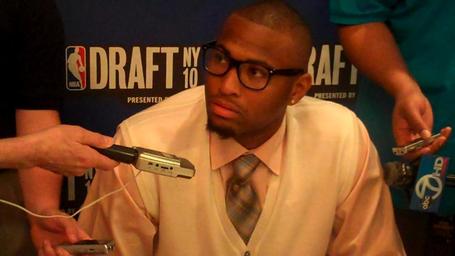 Chances are, he'd also bring these things to the table: 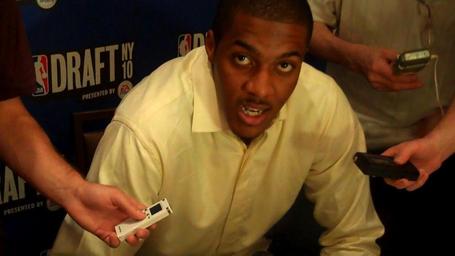 Former Georgia Tech star Derrick Favors. (Photo by Mike Prada / SBNation.com)
Now, step back and think for a moment. Really, if you were to build the ultimate NBA big man, he would basically be DeMarcus Cousins and Derrick Favors all rolled into one. He would have Cousins' offensive ability combined with Favors' defense. He would have Cousins' skills combined with Favors' athleticism. He would have Cousins' polish combined with Favors' upside. He would have Cousins' mean streak combined with Favors' coachability.
But of course, since this is reality (sorry, David Kahn), you can't just create the perfect big man. You have to pick one or the other.
Therefore, if you're looking for real intrigue in the 2010 NBA Draft, which starts at 7:30 p.m. Thursday at Radio City Music Hall, look no further than the Cousins vs. Favors dilemma. That drama could start as soon as John Wall goes off the board with the No. 1 pick to the Washington Wizards.
There have been a lot of two-player "debates" in recent drafts (Oden-Durant, Paul-Williams, Beasley-Rose, Rubio-everyone), but none were between two players who on the one hand are so similar, yet on the other hand so different.
And if we're really being honest, both come with huge risks. The off-court "issues" with Cousins could be legitimate, in which case he might never get the most out of his skills. The on-court issues with Favors, be it his rawness or his inability to score, could also be legitimate, in which case he'll end up having a similar impact to Kwame Brown. We have no idea. One NBA general manager is going to look like a genius for picking one over the other. Or both GMs will be geniuses, and the two will, in the words of one writer on Wednesday, form a great big man rivalry for the next 10 years. Or both will falter, leaving two GMs wondering why they didn't go for the proven Wesley Johnson. That's what makes this whole discussion so interesting.
"Cousins [has been the better workout guy], for obvious reasons. He's the more polished guy. He's more mature physically, he's got a more developed skill set," Draft Express' Jonathan Givony told me. "But that's not the question.  The question is not who is going to work out better for you now, it's who is going to be a better player for you in two to three years or who is the guy you want to have in your NBA organization?"
What's the answer to that question? Well, it's complicated. On the one hand, there's clearly something a bit off about DeMarcus Cousins. What that is, however, is tough to figure out.
Maybe it's the way he was continually spotted yelling at John Calipari during games when Calipari tried to coach him. Maybe it has to do with his temper flaring up early in the season. Maybe it has to do with him showing up to the NBA Draft combine with a 16.3-percent body fat percentage, the 12th-highest of all time and the second-highest, behind only Nick Collison in 2003, among lottery picks.
If we're being honest, maybe it has to do with his snarly nature toward the media, which continued at media day today.
"Some of it's talk, I really don't know," he said when asked about his perceived off-court issues. "But I really don't listen to it. I try to impress the people that are actually going to draft me."
Or maybe it has to do with some on-court issues. Cousins was insanely productive last season in college, but only played 23.5 minutes per game and averaged over five fouls per 40 minutes. He wasn't always great on defense. Finally, maybe it was a case of Wall making Cousins better, a luxury Favors didn't have.
But at the same time, there are easy answers to a lot of his questions. Sure, he yells at his coach, but that's just the kind of fiery, emotional player he is. Sure, his temper flared early in the season, but he got much better down the stretch, something he said Calipari in particular helped him with this season. And yes, he had a high body-fat percentage, but it didn't hurt him in college (Wall said it was more about foul problems than conditioning), and he's working on that.
(But yeah, he's still snarly toward the media. Sorry. But hey, Wall said that if you'd spend a day with Cousins, you'd find he's actually a really funny guy).
And once you peel away those layers, there's a lot to like about Cousins. I could tell you about them, or I could just quote our Timberwolves blog Canis Hoopus.

Holy crap did this guy have a great year.  He does everything you could possibly want from a big.  He shoots a high rate from 2, he draws a huge number of fouls (8.4/40), he blocks shots (7.9%), he owns the offensive glass (2nd in the nation with a 20%), and he carries a massive usage rate without turning the ball over a ton.  This guy deserves consideration for the #1 pick.  There have been all sorts of rumors about his character but I honestly have no idea what the real deal is.  Here's hoping the Wolves are putting in a ton of leg work on this kid because he's clearly one of the top 2 or 3 prospects in the draft, especially if his whispered red flags are really nothing more than adjustable attitude problems.  If he measures out as having legit NBA center height and length, he'll be a tough prospect to pass over...no matter where the Wolves end up drafting. ... It's really hard to overstate just how well Cousins performed this year.  His offensive rebounding (20% vs 14.1%) and shot blocking (7.9% vs 3.6%) were well above and beyond what Griffin put up, which are things you like to see in a young big. Cousins also got to the line at a better clip (73.1% vs 70.6%) and turned it over less (14.8% vs 18.1%).

And before you bring up the limited minutes thing, there's been ample evidence that great production, particularly great rebounding production, translates extremely well to good production with more minutes.

But the questions still linger, and for those teams that are really concerned, there is another option.

Unlike Cousins, you shouldn't ever have to worry about Favors having any ... uhh ... issues. Favors is coachable, willing to improve and a good "face" of the franchise, if you will. He's also an unbelievable defensive player that is a quick study. Favors and Cousins played a one-on-one game in a workout in Philadelphia, and while many were more impressed with Cousins, Favors said he was able to mostly stop him because he's picked up Cousins' moves from knowing him throughout the basketball pipeline.

It's that combination of athleticism, smarts and coachability that has many excited about Favors. Say what you will about great college production, but players with all three of those qualities in spades rarely fail. As an example, Dwight Howard had everything but production, and yet, he became the league's best big man over Emeka Okafor, a guy who was the best player in college basketball the season before. Cousins is no Okafor, but it's hard not to at least think of that comparison when talking about the Favors-Cousins question.

But unlike Howard, there is a rather large body of work of Favors being, well, underwhelming. His freshman year at Georgia Tech wasn't bad, but he didn't come close to dominating games like Cousins did. He came on a bit at the end of the year, but still fumbled too many passes, missed too many short shots and ceded too many post touches to the inferior Gani Lawal (who he also not-so-incidentally praised at media day). Favors is younger than Cousins, but not my much. Certainly, not by enough to fully explain away the huge difference in their production in college.

So what could explain it? Perhaps the issue was Favors' teammates. While Cousins got passes from John Wall, Favors had to share the post with Lawal and receive entry passes from a rag-tag group of guards. Favors will never admit this being a source of frustration for him, but it had to be. When he was asked point blank about what it would have been like to play with Wall instead of his guards, he paused for an instant, trying to find the right word, before finally saying "They might not be as good as John Wall, but those guys are good. They're hard workers, and they do a good job." Not exactly a ringing endorsement.

Givony took the diplomatic route, saying both Favors' teammates and his rawness played a role in his underwhelming season, and I'm inclined to agree. I came away from talking to him thinking he was very humble (which is good), but also very much lacking a mean streak. At the same time: athleticism, smarts, coachability. When you have those three qualities, you don't often fail.

So there you have it. In one corner, the insanely productive guy who wants to be great, but also might be a hot head. In the other corner, the athletic freak that's willing to defer, but may not be willing to be great. Both guys are slated to play the most position on the floor in the NBA, and even to this day, it doesn't seem like too many people have a handle on either. This debate has it all.

Same position? Check. Contrasting styles? Check. Iffy but maybe legitimate "intangible" questions on either side? Check. Nature vs. nurture, in terms of their college environment? Check. Paralysis by analysis? Check.

In other words, it's everything we love about the NBA Draft. Barring injury, we know John Wall is going to be great, and we know Evan Turner will be very good (though maybe not great). There's no intrigue in talking about them.

But Derrick Favors and DeMarcus Cousins? That's a real guessing game. And isn't that what makes the NBA Draft so great?

Mike Prada is reporting from New York, where he'll be covering the NBA Draft on Thursday for SBNation.com and SB Nation DC.