With the 27th pick in the 2010 SB Nation NHL Mock Draft, our Montreal Canadiens bloggers at Habs Eyes On The Prize select... 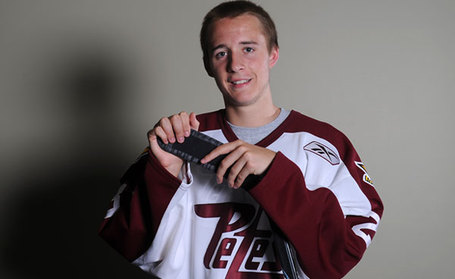 From In Lou We Trust's prospect profile on Spooner:

Yet, despite the praise from the director of CSS, Spooner's ranked in the second round.   Why? His size certainly doesn't help; like Bennett, he needs to get stronger.  However, he may not be getting any taller.  The injury certainly forced him to miss a good part of the season and comeback into the OHL playoffs cold.  So there could be some questions resulting from absence; namely, how would a fully healthy and "in form" Spooner would have been in the playoffs?  Enough to make a difference?

Per the NHL.com scouting profile, Spooner did represent Canada at the U-18 level both in the Ivan Hlinka Memorial Tournament (a U-18 summer tourney) and the World U-18 tournament. It's a good sign that he has been talented enough to represent Canada at the U-18 level. In the Hlinka tournament, Canada was fantastic. They won the whole tournament in impressive fashion over Russia, 9-2 in the final.  Yet, Spooner only contributed one goal and two minor penalties in four games.

However, Canada was very bad in the World U-18s, falling into the relegation round (they survived relegation, fortunately).  Spooner only put up two goals in Canada's disappointing venture in Belarus.  Again, he's still developing and these are short tournaments. Besides, I don't know how his coaches utilized Spooner on Canada's roster. Maybe he wasn't on a scoring line? Yet, they are against top competition - U-18 national teams - and you'd like to see offensive players actually put up some points against them.  This could be a reason why Spooner is a projecting as a first round pick/early second round pick instead of earlier in the draft.

Three more picks tomorrow morning, as well as the unveiling of a complete second round.