The idea that pitching wins reflect a pitcher's value has been swatted down so often and effectively that at this point, it's a canard that most of us ironically puppet around. That said, there still are folks out there who laud a pitcher for having an 18-win season, and that's why the example of Kenshin Kawakami is valuable.

Kawakami took a 4.78 ERA and 1.46 WHIP into Saturday's game -- bad, but not nearly bad enough to explain his 0-9 record. Especially since he pitches for the Braves, one of the most powerful offensive teams in the National League.

On Saturday, Kawakami pitched seven strong innings for the Braves, giving up only one run against the Tigers. It looked as though his hitters were going to leave him hanging again, until Chipper Jones' home run in the seventh put them ahead. Here, though, is where things get good. Check the picture after the jump.

The Braves take a 4-1 lead into the ninth inning. Takashi Saito records two outs, but not before surrendering a solo home run and two walks. Ed O'Flaherty relieves him, loads the bases with a walk, and then issues another walk to knock in a runner. 4-3.

Peter Moylan relieves O'Flaherty. Johnny Damon works Moylan to a 3-2 count. And then... 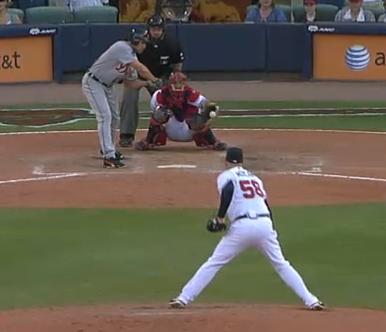 PERFECT STRIKE! Called strike three! Ballgame! Braves win! See, the thing is, a sudden gust of wind blew the strike zone six inches to the right. They really need to tie that thing down.

As a result, Kenshin Kawakami gets his first win of 2010 in the same arbitrary manner in which he collected his nine losses. Seriously, if you want to determine a pitcher's worth, you may as well abduct a goat, spray-paint the pitcher's initials to his back, and see whether he finds his way back to Old Man Harper's farm. (If your family befriends it and keeps it as a pet, record it as a no-decision.)