Share All sharing options for: FIFA Blames You Looking At The Problem For The Problem 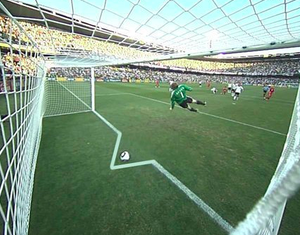 FIFA would like to clarify: human error is part of officiating, and they're comfortable with that. What they're not comfortable with is you showing footage that highlights that error in detail during the match.

FIFA spokesman Nicolas Maingot said Monday that replaying the incident was "a clear mistake." "This will be corrected and we will have a closer look into that," Maingot told a news conference Monday. "We will work on this and be a bit more, I would say, tight on this for the games to be played."

This refers to the stadium screens showing just how offsides Carlos Tevez was when he scored the opening goal in the Argentina/ Mexico match, but it could just as well describe the cancerous officiating and FIFA's approach to fixing some of the more obvious gaffes made by referees in this Cup.

Koman Coulibaly disallowed a crucial goal for the US, Jorge Larrionda blew a clear goal call for England against Germany, and Argentina received a freebie thanks to the afrorementioned offsides call: all true, yes. FIFA does not deny that these are mistakes and potentially harmful dark spots on an MRI of the sport. The real problem, though, is that you went to the doctor in the first place, and insisted on seeing the problem.

The world's most popular sport is run by the same logic you use when turning up the radio to blot out ominous noises in your car engine. So you and FIFA have that in common, and never mind the frightening knocking noises the sport makes every time they go over 45 miles per hour.