Mikhail Prokhorov Continues To Be More Awesome Than Your Owner

Share All sharing options for: Mikhail Prokhorov Continues To Be More Awesome Than Your Owner

According to the New York Post (via Sporting News), the New Jersey Nets are in the process of building a billboard to promote the team's new ownership team, Mikhail Prokhorov and Jay-Z. Oh, and did we mention? They're building it across the street from Madison Square Garden. And you wonder why we love him? 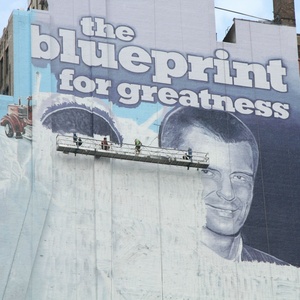 Not only does he score points for the audacity here, but the billboard itself is a clever play on Jay-Z's classic album, The Blueprint. And this is why you can't count out the Nets with LeBron.

As Adrian Wojnarowski writes at Yahoo! Sports, Prokhorov could be pretty persuasive:

The presentation of New Jersey Nets owner Mikhail Prokhorov has been designed to reach LeBron James on his deepest and most superficial of levels. The self-made mogul has carefully crafted a detailed and daring plan to make James a billionaire. The Nets will show him the map of the world, where the mogul has gone in China and India and Russia to make his billions and convince James that there’s a blueprint here for him too.

It'd be a pretty sizable upset for James to take the chance of joining up with Jersey, but even so. How much of a chance are you really taking by latching on to an empire controlled by arguably the most successful crossover businessman of all time (Jay-Z), and a Russian businessman who's worth $18 billion, and has been successful at every business venture he's ever tried. Some of that was luck, but who cares? Mikhail has the midas touch as far as I'm concerned. And he's clearly not scared of the Knicks, or anyone else. Just... Awesome. Are you listening, 'Bron?

Food for thought, anyway. And speaking of food, here's a picture of Jay-Z, Mikhail Prokhorov, and Michael Bloomberg having breakfast. 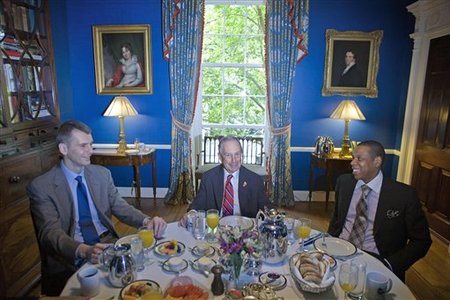 You know what they're drinking there? That's not orange juice. Call it empire nectar. Fresh squeezed, son. Bron, you want some empire nectar? Pull up a chair...