Because after the Tom Izzo fiasco, nothing was going to be simple with the Cavaliers coaching job, Byron Scott's agent is denying the report by ESPN's Chris Broussard. In an e-mail to Fanhouse, Brian McInerney wrote, "Byron has not spoken to The Cavs today." 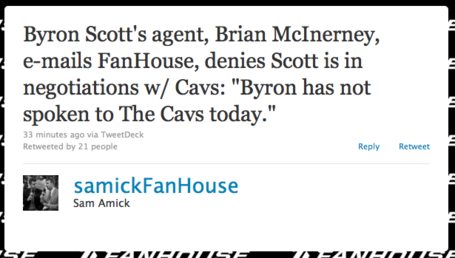 McInerney went on to say he was in touch with Cavs general manager Chris Grant today trying to to re-open negotiations, but that Scott has been unavailable in Arkansas all day. McInerney mentioned that he has been trying to reach him unsuccessfully all day.