Chris Pronger had a bad game on Sunday. Dustin Byfuglien didn't. Are these two truths a coincidence, or has Byfuglien finally broken loose in the Stanley Cup Final? SB Nation's Travis Hughes asks the question.

Chris Pronger had a really bad night of hockey on Sunday night.

In Game 5 of the Stanley Cup Final, Pronger, hands down the Flyers most important player, simply didn't show up to play. As a result, he ended up a minus-5 on the night (and Chicago put one more in while number 20 in white was in the penalty box, mind you) and the Flyers lost a pivotal game at the most important time of year by a 7-4 score.

It was the worst possible time for the big guy known as Alternate Captain Elbows by the faithful in Philadelphia to drop in a dud of a game, but it's something he's done at least once in every series so far. Most people, especially those in Montreal, probably remember Game 3 of the Eastern Conference Finals, when Pronger single-handedly contributed to at least one Canadiens goal as the Habs ran out to a 5-1 victory. Pronger and his defensive partner, Matt Carle, each finished a minus-3. 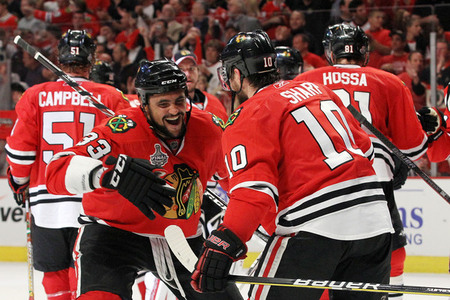 At the same time, Game 5 of this Stanley Cup Final was without doubt the best game of the series for Chicago's big man, Dustin Byfuglien. Number 33 had one assist and precisely zero goals to show for his efforts in the first four games of the series, and fans in Philadelphia were taking out craigslist ads for Buff's manhood as a result.

But he shut those doubters up pretty swiftly on Sunday, picking up four points, including the game-sealing empty net goal in the final two minutes of play. He dominated on the score sheet and he dominated just about every where else, too. You saw his hit on Pronger in the middle of Game 5, right?

Here's the thing, though. If Pronger is on his game, that hit simply doesn't happen. Sure, Byfuglien is a big dude, but Pronger is known as one of the toughest guys to knock off of his skates in the league, and in the event that he does fall down, it's rarely, if ever, with the ferocity that he did in that sequence there.

That hit is every bit as much evidence that Pronger had an off night as the scoresheet from Game 5. It's a battered ego and a tainted confidence, perhaps, but of course, Pronger was his typical self in the post-game press conference.

So, sure, Pronger had a rough night. But the thing with him is that we he puts in a bad outing, he pops back up much like he did following that crushing Buff SMASH and comes back better than ever. Love him or hate him, you have to respect how he's able to control a hockey game when he's on his game. He did it in Game 4 against Montreal after his bad outing in Game 3, and you'd have to expect him to do the same in Game 6 with the Flyers' playoff lives on the line. 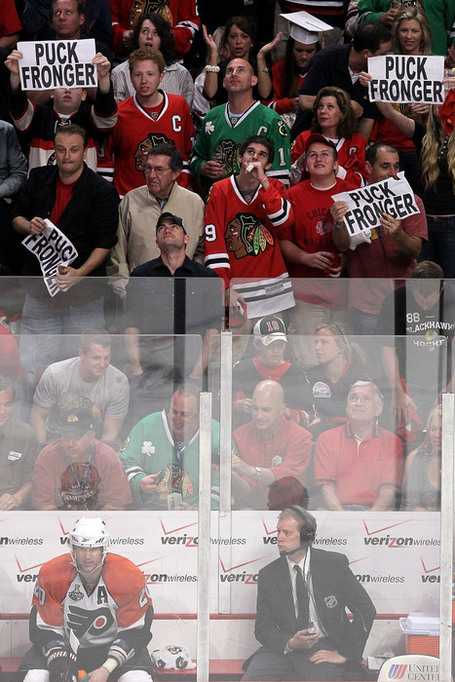 If you see where we're headed with this, we have to ponder the question: was Byfulgien's sudden success in Game 5 a result of him deciding, "hey, it's the finals, I should probably play hockey now," or was it more Pronger having a terrible game and Byfuglien reaping the benefits?

When you account for penalties, nothing really changed in terms even strength ice time when it comes to the Pronger versus Byfuglien matchup. Joel Quenneville changed up his lines prior to the game in part to get his weapons away from Pronger. As a result, though, Byfuglien still saw plenty of ice time against number 20 in Game 5. The lineup changes really didn't make a difference.

If Pronger is on his game, you can make a solid case that at least a few of Chicago's goals aren't goals.

On their second tally, Pronger is standing right next to Dave Bolland, the goal scorer, allowing him clear access to a virtually open net at the near post. Byfuglien picked up a secondary assist on that tally.

If Pronger isn't in the penalty box on Byfuglien's goal in the second period, there's no way Byfuglien has a free pass to sit in front of Brian Boucher and bang home a loose puck in the crease.

It's just something to think about as we approach Game 6. Byfuglien, the first star of Game 5, was a major reason, perhaps the reason, the Blackhawks embarrassed the Flyers on Sunday. But if Chris Pronger rebounds like we should all expect him to, will Byfuglien be able to exploit Philadelphia in the same way?

This matchup, as important as it's been all series long, could be the key to determining whether we have a Game 7 on Friday or if the Blackhawks hoist the Cup in Philly on Wednesday night.