2010 World Cup Group A Preview, Predictions: Sifting Through The Tournament's Most Balanced Group

France has the talent. Uruguay has the firepower. Mexico has the skill, and South Africa has the home field advantage. Group A is the most even, top-to-bottom, of World Cup 2010's quartets.

Share All sharing options for: 2010 World Cup Group A Preview, Predictions: Sifting Through The Tournament's Most Balanced Group

No host nation has ever failed to make the second round of the World Cup, a factoid that's become aphorism.  South Africa, however, will be the greatest test that cliché.  They are not only the weakest nation to have ever hosted the tournament, but they're also grouped with three capable sides.  Mexico's skill, pace and style could wilt the Bafana Bafana.  France has the group's best collection of talent, while Uruguay has the quartet's most capable goal scorers.

In a twist on the other group previews you've read, SB Nation walks through Group A's six matches, telling you what to expect from each of the fixtures. We could go player-by-player, tactic-by-tactic, but instead we'll concentrate on the aspects of each match most likely to surface as you watch the action unfold. We go into some purely speculative detail to add some depth to the narrative, but the picks? We'll stand by those. 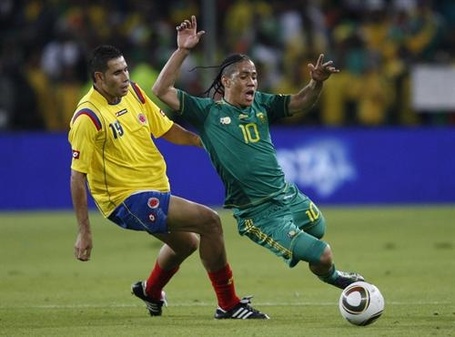 Expect Mexico to start slow while South Africa comes out firing.  The Bafana Bafana can win some corner kicks, draw some fouls, and eventually get Steven Pienaar to serve a dead ball to beat a Mexican defense that has had trouble defending set pieces.  This weakness combined with a slow start could see Javier Aguirre trying to stay within one before halftime, when he can regroup.

At that time, Aguirre will be able to get his team on track.  Be it through waking his kids up  or by subbing them out, Mexico will eventually show their three true colors.  Central midfielder Gerardo Torrado will pick apart the South African defense, with the likes of Cuauhtemoc Blanco and Guillermo Franco, substituted on, providing Mexico with the focus they'll need to get a result.  An eventful second half will ultimately give each team a point.

The pick here is South Africa 2, Mexico 2, but the Mexicans can get all three if their kids' naiveté makes them ambivalent (as opposed to paralyzed).  There is a huge gap in quality between the hosts and El Tri.  South Africa should be thrilled with the draw. 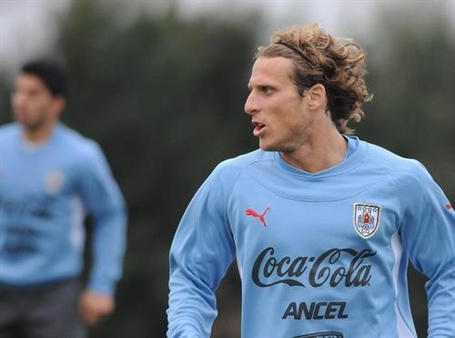 France has quality at every position, whereas so much of Uruguay's talent is concentrated in two places - strikers, and central defense.  Up top, Oscar Tabárez has Diego Forlán and Luis Suárez, while anchoring the defense he relies upon Diego Godín and Diego Lugano.  Against France, expect La Celeste to play very conservatively at the back while relying on magic from their strikers.

This approach makes midfielder Nicolas Lodiero key.  Uruguay will need somebody who can manage the transition from the defending third into attack.   The young Ajax midfielder will have to manage Les Bleus defensive midfielder Jérémy Toulalan to complete those connections.  Tabárez may have to more Lodiero wide left  to get him away from France's midfield bulldog.

While that match-up unfolds, Franck Ribery will be running-at and beating Uruguay right back Maxi Pereira, but as has been the case for France over the last two years, they'll have little idea what to do once they made turn the defense.

Unfortunately for Les Bleus, they can be countered upon, and with the central defense pairing of William Gallas and Éric Abidal having trouble forming a cohesive partnership, Forlán and/or Suárez are bound to find a goal.  Once they do, it will be difficult for France to unlock them, giving us a Uruguay 1, France 0 result when Lodiero finally puts Forlán behind Gallas. 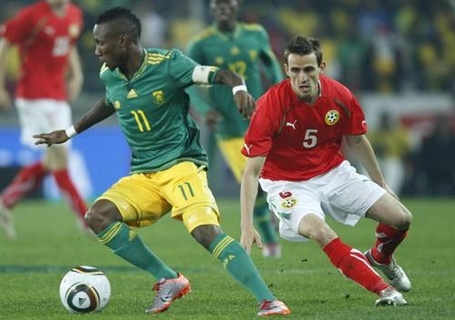 So many matches across all sports are won by the people who want it more.  In this scenario, Uruguay comes into this match with three points, having recorded a convincing victory over the group's most talented team.  Their opponents, the tournament's hosts, remain focused on their goal of advancing out of the group, spurned on my a strong result against Mexico.

Uruguay's complacency sees them sit-back more than they should against their less-talented opponent.  South Africa, likewise, is playing conservatively in defense, but with Steven Pienaar and Teko Moside in midfield, they have the driving forces that make the Bafana Bafana the more ambitious side.

Eventually, Uruguay's unwillingness to close-out attackers around their area sees Steven Pienaar open the scoring from distance.  Once in the lead, the Bafana Bafana exhibit the same defensive resiliency they showed against Brazil and Spain at the Confederations Cup.

Uruguay spends the remainder of the match hoping Nicolas Lodiero can find a seem in the South African defense.   When he finally does, Diego Forlán and La Celeste equalize and escape with a fortuitous point:   South Africa 1, Uruguay 1.

It's the type of late-match collapse that we often see befall less experienced sides.  For South Africa, it's a capitulation that could ultimately cost them second place. 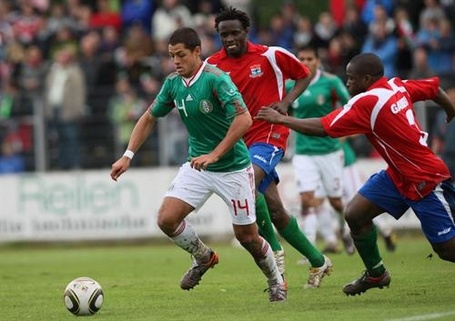 France coach Raymond Domenech has typically used two defensive midfielders, but after an intestinal disorder ruled Lassana Diarra out of the World Cup, the coach used the absence as justification to alter his approach.  Now Toulalan is the lone deep midfielder, playing behind Florent Malouda and Yoann Gourcuff in central roles.

This is relevant against Mexico for a number of reasons, two of which I can actually articulate.  The first was mentioned when talking about France's match-up with Uruguay: Les Bleus susceptibility to being countered.   Mexico has the personnel and mentality to counter, and France is ill-disposed to deal with their transitions.  Second, Mexico will keep more possession than France is used to allowing opponents, and when El Tri's movement opens up the channels along side Gallas and Abidal, there is only one midfielder who can drop-back and plug the dikes.

This match is tailor-made for Mexico, and coming-off their slow start against South Africa, they will be firing on all cylinders from the opening kick-off.  Gerardo Torrado jumps into the space in front of a collapsed central defense to score an early (rare, for him) goal, while Javier Hernández finishes off a subsequent counter to give Mexico an early, 2-0 lead. 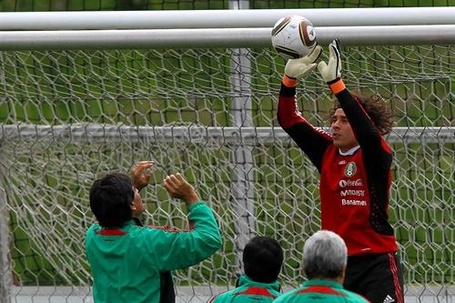 Both teams come into the match on four points, though a draw would put Mexico through on a tiebreaker over La Celeste.  Regardless, El Tri is unlikely to play for a draw, and with their midfield advantage and ability to get at Uruguay down both flanks, they could run Uruguay ragged.

Uruguay's central defense will outperform the French and keep the La Celeste from falling behind early, but eventually Javier Hernández will continue his coming-out-party, converting the brilliant work of the players around him to give Mexico a first half lead.

Against a good Uruguayan defense and with first place in their grasp, Mexico becomes less ambitious and more controlling.  At various points Uruguay will elicit gasps from the crowd, but the close calls from Luis Suárez will only reinforce the Mexicans, who at some point will become content with their one goal victory.  Mexico 1, Uruguay 0 sends Mexico top with seven, with Uruguay hoping France can put them through. 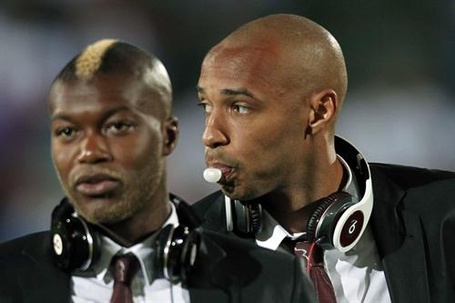 With France out of the tournament, Raymond Domenech starts a handful of players who would not see the starting XI were Les Bleus still alive.  Mathieu Valbuena is in midfield.   Abou Diaby is in to protect him.  Thierry Henry re-surfaces.  Marc Planus and/or Sébastien Squillaci are in central defense, and in the ultimate irony of the Raymond Domenech era, the coach's final match managing Les Blues sees his second choices perform better than his first.

The combination of Ribèry and Valbuena run circles around the Bafana Bafana defense.  Thierry Henry has the movement to take advantage of the open spaces.  Squillaci and Planus aren't great, but they're unwilling to show the South Africans the same reverence implicitly exhibited by the Uruguayans.

It is an extremely frustrating day for South African and French fans alike.  Why didn't those guys play like this in their other matches, one group will ask, while the others will conclude their confusing relationship with Raymond Domenech after a frustratingly good performance.  Goals by Thierry Henry and substitute Djibril Cissé see a France 2, South Africa 0 result, sending the Bafana Bafana out.

Aggregating the meaningless predictions, we get an irrelevant table:

Mexico and Uruguay are the picks, but the goalscorers are just part of fun. After all, who can predict the exact goal-scorers with a straight-face? But given the match-ups and order of matches, don't be surprised to see El Tri and La Celeste advancing to the knock-out rounds.