The 19th century introduced the world to many utopian ideas from millennial optimists, but only one survived in its original, flawed, absurd and altogether beautiful form: The World Cup.

Share All sharing options for: The World Cup: The Last Surviving Utopia

Consider the roots of the World Cup, and you'll see that it comes off the same branch of Belle Epoque utopianism spawning the Olympics, the League of Nations, and the World's Fair: grand, huge globalist ideas of a world without borders, an idealized world of connectivity uniting a billion men and women in large hats and fine dresswear across the globe under the banner of universal progress and cooperation. Zeppelins and futurist statuary would be involved somehow; mustaches would be worn.

You live in the aftermath of all this optimism, and know how it worked out: unevenly.  The Olympics struggle to maintain relevance, the League of Nations disintegrated in the run-up to World War II, and the Hindenburg ran into the middle of a fierce domestic dispute between hydrogen and oxygen. Messy remains the best word to describe the world at its fringes and in its centers, and the best-laid plans of the 19th century's millennial optimists ran headlong into the complications of a sloppy, violent reality: World War II, the Cold War, and the ongoing popularity of Two and a Half Men.

The World Cup falls into this category of millennial dreams, but even at the first World Cup in 1930 the practicalities and jagged inconsistencies of the moment intruded on Gallic idealism. Jules Rimet, head of FIFA and the namesake of the trophy, admitted that Uruguay made an ideal locale for the event due to their extravagant spending on the centennial of Uruguay's founding. Europe in 1930, being completely broke, did what you would do in hard times: They found an excuse to invite themselves to someone else's party, and then enjoyed the hors d'oeuvres and free bubbly.

Uruguay won the first World Cup but became so enraged at the paltry European representation at the Cup -- only four teams made the two-month round trip to the Cup across the Atlantic -- they declined to participate in the '34 World Cup, becoming the only side to defend their championship by extending a middle finger and walking away from the competition altogether. World Wars interrupted the Cup once, the Cold War fractured its politics innumerable time and ways, and global geopolitics continue to impact it to this day.

It will not go as planned, things will go wrong, and controversies will be had. And for 80 years, that has been part of the appeal of the world's only true championship: pulling it all off in spite of the improbability of any of this happening at all, and creating some truly beautiful soccer in the process.

FIFA is, yes, a corporate megalith governed by a sinister network of connections and bribery rivalling that of the shadowiest of shadowy James Bond villains. Their president, Sepp Blatter, may be Ernst Blofeld or Cobra Commander. With accommodations like these and the title "Mr. President,"  he only lacks a small island fortress to complete the ensemble:

Blatter, 73, is no ordinary executive. The "President", as he is addressed, has a red-carpeted private entrance at his spacious office and an entourage of up to five bodyguards. He has also requested a private bathroom, an African-themed en-suite to his office. The Times has established that Blatter has a personalised mini bar and fridge filled with South African wine and, at his special request, ice made from bottled Evian water.

It is precisely what you see in the dictionary under "Evil Plushly Appointed European Bureaucrats." If Liam Neeson burst in and snapped his neck, you'd just assume he was guilty as charged and involved in something nefarious worthy of Taken-level wrath.

The players invite ridicule, too. The planet's most skilled player, Cristiano Ronaldo, is a caricature of preening, mankini-waxed Euro-femininity as likely to dive for a penalty as finish a drive to goal. England's John Terry has made hecklers' job far too easy by embroiling himself in a paternity scandal with his Premiere League teammates. America's standard-bearer, Landon Donovan, once posed for this picture without irony: 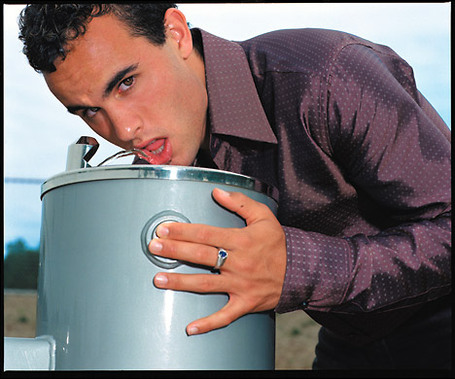 The locale itself this year is an improbable and possibly volatile backdrop for the Cup. South Africa could not even compete internationally under FIFA rules until the fall of the apartheid regime, and only began play in 1994. The imprint of the racist social control system will still be felt by fans headed to SA as they head from suburban hotels in the hills over high overpasses past townships into the city for games in Johannesburg, a city designed to allow 20% to control 80% of the population. They may feel its legacy in other, more frightening way: in the impact of crime, a looming specter at this year's tourney despite the presence of hundreds of thousands of security personnel called on to prevent just such a personal experience between World Cup fans and one of apartheid's nastier leavings.

The tourney will still vibrate with its own fierce energy despite this, despite the shambolic ticket arrangement FIFA set up requiring Africans to buy tickets when Africa isn't exactly "DSL friendly."  It will be made better and more memorable for its absurdities: the fans who despite the obstacles of transglobal airfares arrived with suitcases full of beer, the South Africans who circumvent FIFA and end up at the game anyway, the one team each tournament whose talent deficits and dysfunctions disappear on a sustained burst of spontaneous combustible brilliance through group stage.

The games will write themselves with no script. The actors will improvise. The results, at times, will be transcendent in the way that only matches between people wearing the flags of their countries can be. The World Cup is one of the last safe spaces for open national chauvinism in its most naked form, as both stereotypes and VISA are happily accepted here. The Germans play "with Teutonic efficiency;" the Brazilians with "sultry samba style." The United States are "brash and raw," the Italians dive "with operatic flair," and the Argentines enjoy "a slow tango through midfield building to a dramatic finish." Dust off all the cliches, because once every four years each nation sends their national super-robot of tribal stereotypes and happily wallows in them until the sad final minute of their stay expires, and they have to fly home with hefty credit card bills and hangovers awaiting them. The Scots don't just wear kilts to World Cup qualifying matches because they like them. They wear them because you like it when they do because it signifies their tribe, a tribe that sadly did not qualify for these games.

This brings up a final point: in a world of "world champions," the World Cup lays the most legitimate claim to this title. Australia had to beat Bahrain to qualify for the Cup. The United States had to play Costa Rica. Each team, in the fine world of theory, of course, has an equal and fair shot to qualify for the Cup, something some very good teams did not do this time around. Turkey finished third in 2002, but they played the role of sparring partner for the United States as a non-qualifier in a 2-1 friendly last Saturday in Philadelphia. There are no guarantees or byes: after the host country's automatic invite, the other 31 slots belong to whomever plays the matches and wins out to advance against a field constituting what you call "the entire world as we know it."

(Antarctica doesn't field a team, but put some cleats on some penguins, have them take over McMurdo Station by force, and give them a Nike sponsorship and they're just as eligible as anyone else to hoist the trophy.)

Utopia means "nowhere," the kind of geeky gag they appreciated back in the 16th century when Thomas More wrote his book about a non-existent island paradise. The happiest dreams of millennial optimists -- utopias, all of them -- ultimately met the pitiless practicalities of the world. Some become something else entirely, while others wither into obscurity or irrelevance.

For all its imperfections, the World Cup stands as one that survived: imperfect, overly ambitious, and fraught with absurdities, but unquestionably and undeniably real in its drama and heft. In a century strewn with the wreckage of good ideas gone bad, the first kick of the ball on June 11th will be the heartbeat of one that did not die, and indeed thrives. The World Cup is a real, absurd, flawed, and vibrant place, and for a month this summer it will be the only place to crown a true world champion in anything.