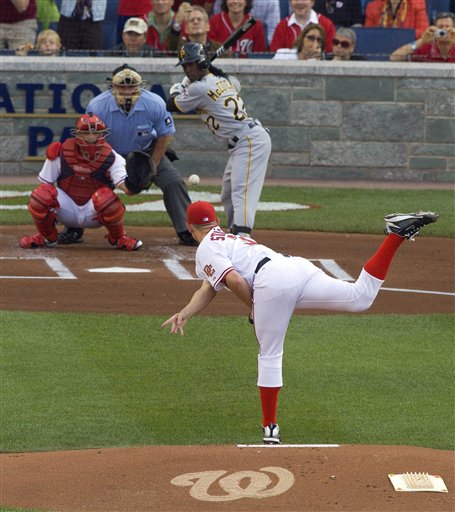 Stephen Strasburg threw 94 pitches Tuesday night. 58 of them were fastballs. They averaged 97.7 miles per hour. The slowest was 95.3. The fastest was 100.1. Nine of them were cut on and missed.

Stephen Strasburg threw 94 pitches Tuesday night. 25 of them were curveballs. They averaged 82.2 miles per hour. Five of them were cut on and missed.

Stephen Strasburg threw 94 pitches Tuesday night. 11 of them were changeups. They averaged 90.4 miles per hour. Four of them were cut on and missed.

Strasburg featured three pitches in his debut, and each is already among the best of its type in the league. A pitcher with one of his fastball, his curve, or his change would be worthy of a first-round pick. A pitcher with all three of them is worthy of consideration as the best pitcher in baseball, and as insane as that sounds, who's going to disagree? Who, that watched those seven innings, believes Strasburg still has more to prove?

I mean, okay, I guess he does have to prove that he can do this with consistency, game in and game out. And Strasburg isn't going to strike out 14 batters every outing. He's going to run into some struggles. Even though his early schedule looks pitcher-friendly - he'll follow Pittsburgh with starts against Cleveland, Chicago, and Baltimore - he'll experience some bumps, and he'll have days where he gets hit or loses the zone. But is he ever going to get torched? Is he ever going to miss the zone completely? Can anyone even imagine what it would look like for an arm with that stuff to come out after three and a third?

I was talking to a friend about Strasburg the other week. We were discussing the possibility of Strasburg underachieving, and what we would look back on as being the sign that we missed. We agreed that it would be command. That, if Strasburg didn't come out and impress right away, it would be because his location suffered against Major League competition. And, tonight, we could see some of that, as Ivan Rodriguez routinely had to move his glove to catch Strasburg's tailing fastball and biting curve. Strasburg clearly doesn't possess a Maddux-like ability to put the ball wherever he wants. But he does come damn close, and almost frighteningly close for a guy who can reach triple digits. No, Strasburg will probably never be able to spot with the best, but he gets so much movement that he'll generate a lot of swings at balls out of the zone. He's sufficiently deceptive and overpowering that he doesn't need to pitch into teacups to sit with the elite.

I consider it a privilege to have been able to watch Strasburg debut. It's probably said too often, but that game was art. And you can only imagine how good this feels for Nationals fans, who, aside from Jordan Zimmerman and John Patterson, have by and large missed out on watching starters with the ability to pick up a big strikeout. Ten Nats have started games so far in 2010. Strasburg already has more strikeouts than four of them, and he's only 18 behind the leader. This is a new sensation. An electrifying sensation. I enjoyed it from afar, but fans will be able to see this every five days. That's an absolute blessing.

In closing, hot diggity damn. Strasburg's even a humble, down-to-earth interview. He is the perfect young player, a player who sneezes ability, and his is a total package of which legends are made. Strasburg's a guy who makes you want to have grandkids.