According to Yahoo's Adrian Wojnarowski, John Wall has been signed by Reebok to a five-year, $25 million endorsement deal. The presumptive top pick in this month's NBA Draft will also have two "signature shoes" created for him by the company as part of the deal.

It's a huge deal for Wall and indicative of his massive star power, considering Blake Griffin, the top pick of last year's draft, got a deal for less than $500,000 per year. Wall will take over from Allen Iverson as the face of the brand. In that case, he might want to switch his Twitter profile picture to one that doesn't have him wearing a Nike shirt. 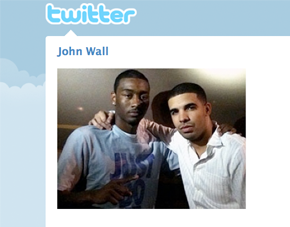