The NBA Summer League is littered with talented players trying to find their way onto an NBA roster. SB Nation will profile several of these players throughout the week. First up: Zabian Dowdell from the Phoenix Suns' Summer League team.

In the NBA Summer League, there are tons of players who are so close to securing a spot on an NBA roster, but just haven't gotten the opportunity. SB Nation will profile many of these players in our "On The Cusp" series. We start with Zabian Dowdell, a 25-year old point guard playing for the Phoenix Suns.

Pretty much every guy we will profile in this series believes they can play. Pretty much all of them believe it's really only a matter of finding the right opportunity.

But how many of them will actually say they think they can start? Forget about making an NBA roster, I'm talking about starting on an NBA team. Yet that's exactly what Phoenix Suns guard Zabian Dowdell said when asked to sell himself to an NBA team.

"I feel like I could be a starter," he said, matter-of-factly. "I have all the skills. I feel like I'm a lot better than all the guys in the NBA now, and I'm ready to show everybody."

Dowdell is back at Summer League for the fourth time to do just that. He played for Seattle in 2007, Sacramento in 2008 and Phoenix again last year. This year, he's the undisputed starting point guard for the Suns Summer League team, an opportunity he hadn't received in any of his previous three stints. He said he got offers to play for New York and New Jersey, but decided on Phoenix because he loved their offensive system.

His goal is to just be himself, so he can remind people why he was so close to breaking through last year. And yes, he really was so, so close. 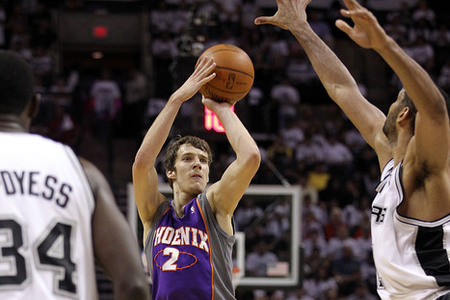 Let's put ourselves in a parallel universe for a second. One of the most memorable moments of last year's NBA Playoffs was Goran Dragic's fourth-quarter explosion in Game 3 of the Western Conference Semifinals between the Suns and the Spurs. It was the culmination of Dragic's incredible rise from a replacement player into one of the league's budding young stars.

But if things broke differently in training camp, that might not have been Dragic shining. Instead, it could have been Dowdell. The 25-year old point guard intrigued the Suns brass in last year's Summer League, displaying great point guard instincts and a natural ability to score while also getting others involved. ESPN's David Thorpe was so impressed that he told SB Nation's Suns blog Bright Side of the Sun that Dowdell was one of the best point guards in Summer League last year (and there were some pretty good point guards in last year's class too). To Thorpe, it was Dowdell, and not Dragic, that was a better player.

So the Suns invited Dowdell to training camp to see him some more. Ostensibly, he was going to be the guy competing with Dragic to be one of Steve Nash's backups. And that's when the string of bad luck began for Dowdell.

One week before training camp, Dowdell came down with a mysterious groin injury during a workout. Initially, it was diagnosed as a sports hernia, a serious injury that keeps a player out for a long time. But eventually, he said that diagnosis was wrong, and it was merely a strained groin. Either way, he could no longer play in training camp, squandering the best chance he had at making an NBA roster.

"Me being where I wanted to be on the court, it was difficult," he said. "I'm the type of person who likes to get in the gym and work on it before I go into the season; before I do anything, and I didn't have the opportunity to do it.  It was tough at times, it was frustrating."

Dowdell ultimately played a few games for the Tulsa 66ers of the NBA Developmental League before going to play for Unicaja Málaga in Spain. Dowdell had excelled in Europe in less competitive divisions from 2007 to 2009, but did not fit in as well in Spain and was cut loose in late June. It was never a good fit for him, and he admitted that he went through a "tough year."

"There were a lot of rumors about the situation," he said. "But stuff like that happens."

It's not the first time stuff like that has happened to Dowdell. After a standout four-year career at Virginia Tech from 2003-2007, he was rumored to go in the first round of the 2007 Draft. There were whispers that he had a first-round promise from San Antonio at No. 28. instead, he went undrafted, faded into obscurity for second-division teams in Europe and never got to show his stuff on a high level. Dowdell said he had to play for those mediocre European teams to provide for his family, but that undoubtedly hurt his stock a lot.

But that's all in the past. This year, Dowdell's doing everything he can to make up for lost time. 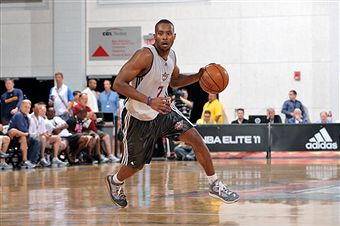 If you love pure point guards, you'll love Zabian Dowdell. To borrow a common cliche, his impact goes further than the stat sheet suggests. Dowdell isn't flashy. He won't make no-look passes or rain three-point shots. He simply manages the game, limits turnovers and finds players in their spots. Basically, everything a point guard should do.

"I know I can score, [but] hat's not something I need to show the Suns," he said. "It's running a team and making sure other guys get the ball in places where they can score.  I just try to go out and do that."

The Suns have been blown out in both of their first two games, but it hasn't been Dowdell's fault. He led the team in scoring in the team's loss to Houston on Friday night, and while he had a poor shooting game in today's blowout loss to the Raptors, the team lost primarily because of awful defense on the wings and on the interior. They're also overwhelmed talent-wise - they have just one lottery pick (Earl Clark) on the roster, and have played two of the strongest teams in Summer League in their first two games - something Dowdell said has made life more difficult for him.

"It is a lot tougher for me as a point guard [without many other lottery talents]," he said "I also think the fact that we only had two days to get the system down and gel - that has a lot to do with it too. But you can't make excuses."

The fact that Dowdell has managed to impress regardless is a major leg up for him. As Thorpe tweeted during the game, he's playing much more solidly than his younger teammates. Dowdell said that ability to play under control comes from his experience in Europe.

"You definitely have to use your head when playing over there, and I learned how to do that. You have to be a lot more efficient over there.  The floor is a lot smaller, the game is slower.  The players are a lot more fundamentally-sound."

True to his nature, Dowdell insisted that he needs to improve all aspects of his game, and not one in particular. I tried to press him on this, and he still didn't single out any one area. For a guy trying to make it as an all-purpose true point guard, it was the right answer. That's his best chance of making it, and if it were up to him, it would be in Phoenix, where he said he's "right at home."

That might be a tall order, considering the Suns already have Steve Nash, Dragic and Leandro Barbosa. But based on Dowdell's supreme confidence, there's no doubt that he'll be trying.