The Texas Rangers: A Story Of Quiet Futility

Share All sharing options for: The Texas Rangers: A Story Of Quiet Futility

On October 1, 1996, Juan Gonzalez hit a three-run homer that put the Texas Rangers in the lead. The Rangers held on to beat the Yankees, 6-2, in Game 1 of the ALDS. This is the only playoff game the Rangers have ever won. 2010 is the franchise's 50th season in the league.

The Montreal Expos are baseball's saddest story, but the Rangers' story isn't talked about as often as it should be, probably because the Rangers haven't been an outright bad team in decades and because they've been represented by plenty of household names (Josh Hamilton, Alex Rodriguez, Juan Gonzalez, Nolan Ryan, etc.) But again, consider this: a team with a .470 all-time winning percentage has been around since 1961 (when they were the Washington Senators), and has only one playoff win to its name.

Time for a chart. Take a look, after the jump. 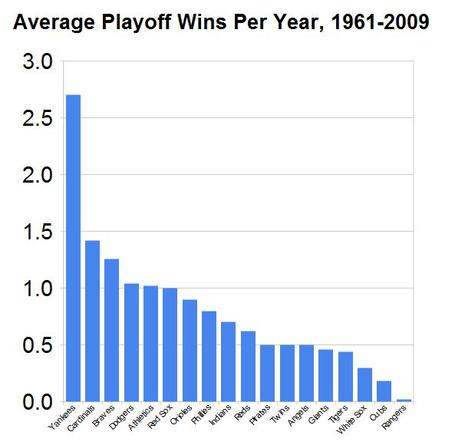 This chart includes every team that has been around since at least 1961. Over the past 49 seasons, the Yankees have averaged 2.7 playoff games won per year. The Rangers have averaged 0.02. A quick note on what this chart is not: an unbiased indicator of success. The Braves, for example, look very good on this chart because the majority of their best years fall in the wild card era (post-1993).

This perspective is valuable, I think, simply because it illustrates how many times this franchise and its fans have experienced reasons to celebrate. They've won three division titles and one playoff game. That's it, and that's why the 2010 Texas Rangers deserve our attention. They'll enter the All-Star break with a division lead and (probably) the third-best run differential in baseball. And despite his underwhelming debut in a Rangers uniform, Cliff Lee will contribute in a big way.

Keep up with the Rangers this season with SB Nation's Rangers blog, Lone Star Ball.