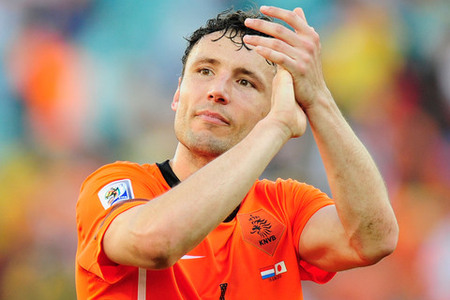 Mark van Bommel is Mr. Popularity. In the four days since he last played, the punditry has done nothing but highlight his since of fair play and his perpetual regard for his fellow player. His dialog with referees is being considered by FIFA as model player behavior, and regardless of what happens on Sunday, people will remember Mark van Bommel for the example he’s set throughout the last month.

2. How has he done in this tournament?

Despite being labeled as a bit dirty, van Bommel has been effective. His physical play has disrupted the Dutch opponents, getting under the skin of a few along the way. If you subscribe to the maxim that it’s only illegal if the referee says so, van Bommel is one of the most effective central midfielders in the tournament.

3. What’s his role going to be on Sunday?

He will be reforming his central midfield partnership with Nigel de Jong, the younger of the pair returning from a one game suspension. With de Jong back, van Bommel may have license to continue his physical play, perhaps motivated by a match-up against a number of players from his former club (Barcelona).

4. Which opponent will be his closest on-field match-up?

5. What beer best represents this player?

Judgement Day, Lost Abbey - This smooth beer filled with dark fruits also leave an unexpected bitter taste, and can be used as a get-out-of-jail free card.