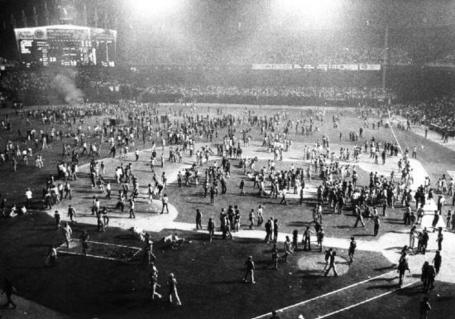 Of all the wacky, out-of-control promotions that have been pulled at baseball games -- and there have been a few -- none is as infamous as Disco Demolition Night. The second game of a Thursday night doubleheader between the White Sox and the Tigers had to be forfeited in favor of Detroit when the White Sox faithful stormed the field and refused to leave.

The idea of an anti-disco night was first proposed to promotion director Mike Veeck, son of owner Bill Veeck. The White Sox had held a disco dancing competition that drew in 5,000 extra fans; someone suggested that doing the opposite, in smashing the records to kingdom come, would work as well. "It sounded like a terrific idea at four in the morning in Miller’s Pub," said Veeck, "but it got even funnier the more we thought about it."

One day, Mike got word that Steve Dahl, a local D.J. who had been fired from an all-disco station, was planning to destroy disco records at a shopping mall. "He was going to do it in front of 3,000 kids. It didn’t take long to convince him he could do it in front of 40 thousand kids," Veeck explained.

"Teen Night" (as it was originally called) allowed $0.98 entry if fans came equipped with a cannon fodder disco record. The records were to be collected and then destroyed in between the two games by Dahl himself. An incredible 50,000 fans packed into Comiskey Park with another 20-30,000 bystanders stuck outside the stadium. In contrast, the game on July 11th saw just 15,000 people in attendance.

The first game was hardly flawless, and not just because a few stations ended their broadcast of the doubleheader early. Several signs saying "Disco Sucks" were clearly visible and some viewers were extremely offended. This was back when the word "suck" was an inappropriate swear and was taboo for television. Spectators later claimed that an unmistakable aroma of marijuana emanated from the stands, and that the fans who didn't deposit their records were hurling them like a Frisbee. It was an odd scene for a baseball game, though the real sideshow had yet to begin.

Before the start of the second game, Steve Dahl walked onto the field dressed in full army garb. When handed the microphone, the D.J. bellowed "Party!" and cued for the records to be demolished. The explosion left an area of the outfield charred and torn. Dahl yelled "Disco Sucks!" several times before the spectators got in on the festivities. Thousands of fans littered the playing field, setting fires, causing explosions, and filling the playing area with debris. Fans climbed the foul pole, stole the bases, let loose a fire hose, and destroyed the batting cages. The undersized security wasn't prepared for a capacity crowd and couldn't contain them all. The players and managers simply watched in astonishment from the dugout as an ordinary doubleheader broke into pandemonium.

"It was the sickest thing I've ever seen in my life," said White Sox pitcher Ross Baumgarten. "I didn't know people could have such little regard for other people's safety." 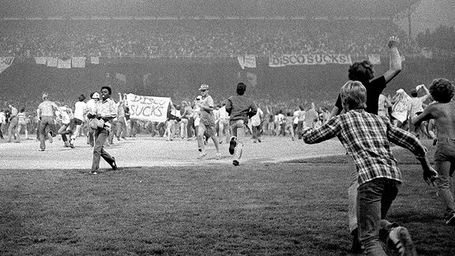 White Sox announcer Harry Caray pleaded for the fans to stop, and even started singing Take Me Out to the Ball Game in a failed attempt to calm them down. Finally, the police arrived 40 minutes later and at last cleared the field. When it was all said and done, only a few civilians suffered minor injuries. Tigers manager Sparky Anderson refused to take the field and the game was called off. AL president Lee MacPhail ruled the game a forfeit, much to the dismay of Bill Veeck. Headlines in Chicago painted the stunt as a disaster, giving Veeck and the White Sox an enormous amount of coverage.

Dahl went on the air the next day and bared no responsibility. "Disco is a disease," he said. "It's a thing you have to be near-perfect to get into. You have to have perfect hair and a three-piece suit, and musically it's just the same song with different words." For his responsibility, Mike Veeck was blacklisted for years from major league teams. Veeck, who later work for the Devil Rars, planned to do a 20th anniversary Disco Demolition Night until he learned Dahl had trademarked the term "Disco Demolition."

Many believe that July 12th, 1979 is the day disco officially died, and if you hate it as much as Dahl, then it is a day worth celebrating. Dahl would later say that disco "was a fad and was on its way out, but (Disco Demolition Night) hastened its demise."

Fans who were in attendance [White Sox Interactive]