Chris Paul's Wedding Toast Causes A Stir: Could He Team Up With Carmelo?

Share All sharing options for: Chris Paul's Wedding Toast Causes A Stir: Could He Team Up With Carmelo?

A number of things to get to here, so let's go one-by-one with these.

1. Wouldn't it be awesome if the New York Knicks struck out on this year's "Big Three" and wound up getting a much better version in 2011 (Amare Stoudemire, Chris Paul, Carmelo Anthony)? Odds of this actually happening are maybe 5%, yes. But not 0%.

2. There's only one New York Post. If we're looking for wild speculation and sensational rumors, it might as well come from the purple-y experts from Manhattan:

It was a wedding toast heard from Broadway to Bourbon Street. [...]

According to a person who spoke with wedding attendee Amar'e Stoudemire, Paul made the reference during a speech of a potential union of himself, Stoudemire and Anthony, saying, "We'll form our own Big 3," Paul allegedly said.

3. "According to a person who spoke with wedding attendee Amare Stoudemire." Not exactly an ironclad source there, guys. Information that's coming secondhand, from a player that's prone to exaggeration... Sure. Why not, right?

4. So, yeah: Probably a little early to plan the elaborate welcome party at Madison Square Garden where they call themselves the greatest trio ever (before they've played a game together).

5. But come on: it's pretty fun to think about. For a number of reasons, actually. On the one hand, it'd be pretty fantastic if someone could beat the Miami Heat at their own game.

But that's just the superficial stuff. Remember: this was a toast at Carmelo's wedding. Far more interesting than this ridiculous rumor... Is that what these guys do in their daily life? Like, here's how I imagine Chris Paul's itinerary this past weekend:

...And that's how NBA History was made. 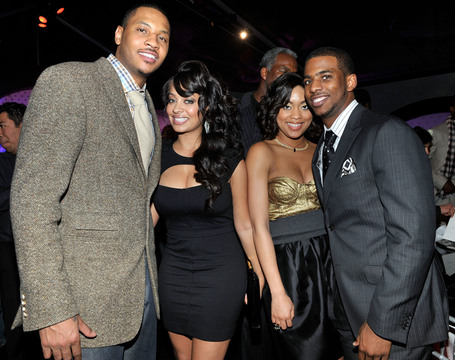 Is this really what goes on among NBA superstars? Maybe.

A few months ago, I would have said no way. But now? With LeBron and Chris Bosh in Miami?