What Would Be The Best Victory Celebration In Sports?

Share All sharing options for: What Would Be The Best Victory Celebration In Sports?

After yesterday's World Cup victory for Spain, I was talking to a friend about the game, and why winning the World Cup has got to be the coolest championship to win in any sport. And winning, then going back to Spain? Even better. 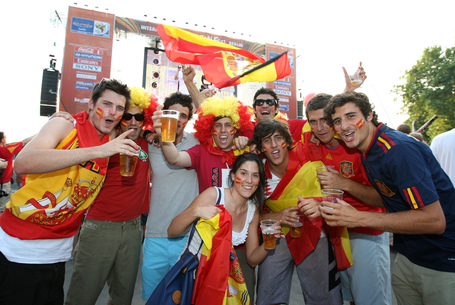 When you consider the Spanish penchant for partying, the lenient attitude toward labor responsibilities, and the very pro-napping stance, there's a decent chance that the people in the photo above will be technically part of the same "party" for a solid 7-10 days.

Can another sport top that experience? 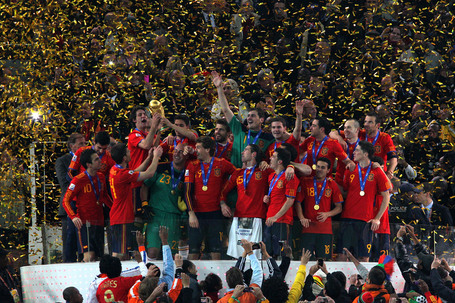 I'm not even talking about the experience for the players. On that front, I'd argue that winning the Stanley Cup rivals it, just by the sheer insanity of the people that would be partying. And because you can drink beer out of the Stanley Cup, but not the World Cup. And because of this quote:

The night after winning the Cup in 1987, Messier brought it to his favorite Edmonton strip club, the Forum Inn, and set it on stage with a dancer. No word on whether or not the Cup was a good tipper.

The following year, Messier dented the Cup and brought it to an automotive repair shop to get fixed. I wonder if the Cup is like a car to Messier. At first it's really exciting, but then over the years it becomes a hassle that is in constant need of repair.

But we're dealing in broader terms than just athletes. We're talking the shared cultural experience of winning a championship. Fans partying in the streets, staying up for days, getting fired from their jobs and not caring... That sorta thing. So what does that list look like?

1. Spain, Brazil, Netherlands, or Argentina winning the World Cup. We're probably leaving out one or two teams, but as far as celebrating victories are concerned, these countries are in the Hall of Fame. Coupled with the World Cup victory coming only once or twice a lifetime, and for a lot of the Spaniards, last night was probably one of the best nights of their lives.

1a. The 1980 Miracle on Ice. I wasn't alive for this, but for nostalgia's sake, let's pretend that the party was on par with what's happening over in Spain this week. Not because it was, but because to admit otherwise would be conceding America's inferiority on a partying scale. I'm not willing to do that, and this would seem to be the one victory with the potential to unite America in a fit of delirious drunkeness. Plus, this picture's just awesome: 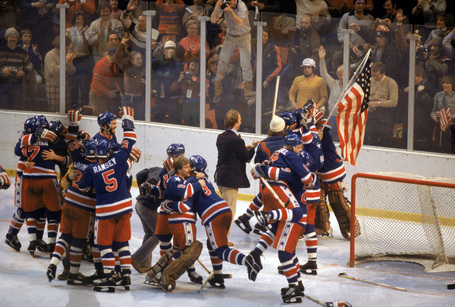 2. Anyone else winning the world cup. Put it this way: soccer means nothing in this country, and everyone went absolutely nuts when Landon Donovan put us into the knockout stage. It only comes every four years, and there's something about one team competing against the rest of the world that makes people go nuts. If America won the World Cup, or even stodgy-ass England got it done, it would be pretty unparalleled.

3. National Championship in Division One basketball or football. Celebrating anything in college is approximately 500% better than celebrating something in either adolescence or adulthood. Much like a delirious celebrant in Spain, you can pretty much ignore responsibilities for a solid week, sleep is completely optional, and the rules are limited. And like the World Cup, it's a highlight that lasts a lifetime. 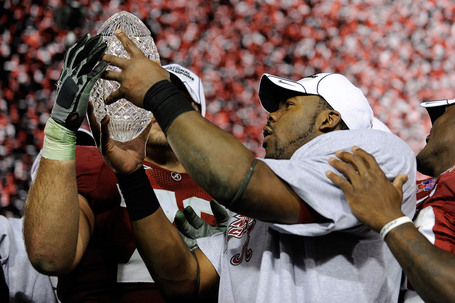 4. Red Sox winning in '04. Or anything like it. Anytime a franchise with massively loyal fans wins something after an era of prolonged futility, the party will be pretty phenomenal. Would you rather have been a Boston fan winning the 2004 World Series, or Yankees fan winning no. 27 last year? There's nothing like your first time. The only reason this doesn't top a National Championship is because, well... Again, everything's 500% cooler in college.

And those are really the top four situations I can think of. After that, there's a significant drop-off. Huge celebrations after Super Bowls, World Series wins, etc, but by and large, sanity remains in tact. The ones above? Everybody goes insane for a couple days, or weeks. And for years, it's a reminder to everyone why sports are so awesome.

Still, I'm definitely forgetting something, so feel free to add your own "best experience" in the comments. Until then, I still say nothing tops this picture and what's sure to be a wild week in Spain. 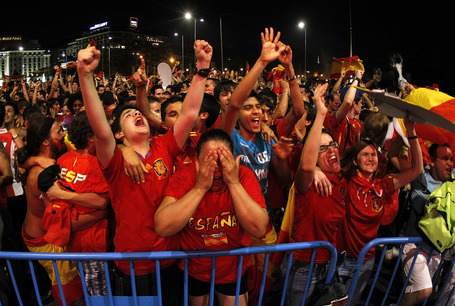